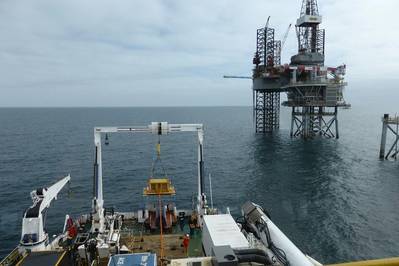 The oil industry's top equipment and services suppliers this week are hawking vastly cheaper ways of designing and equipping subsea wells, aiming to slash the cost of offshore projects to compete with the faster-moving shale industry.
At the Offshore Technology Conference, the industry's annual gathering of floating rig and subsea well suppliers, sales pitches this year are all about cost savings and faster time to first production. With U.S. crude priced under $50 a barrel, offshore projects with their typically high costs and long-lead times are now borrowing from leaner shale in the competition for oil company investment.
Low oil prices have soured new exploration in the U.S. Gulf of Mexico, for instance, but production volumes there have remained strong due to the long lead times of these projects. Gulf of Mexico producers are expected to add 190,000 barrels per day this year to output now running about 1.76 million bpd.
Tool and services companies are offering new technologies that can do several jobs, taking the place of multiple devices or highly-paid consultants.
National Oilwell Varco Inc is exhibiting software it touts as performing much like a drilling expert, sorting through vast amounts of data to find ways to speed production and reduce downtime.
The new software "takes actions a person would do and runs them automatically. It's low cost and it's simple" said David Reid, National Oilwell Varco's chief marketing officer.
Baker Hughes Inc is showing a new tool called DeepFrac that it said eliminates several steps now required to complete underwater wells. That saving pares the price of a well by up to 40 percent, speeding first production and lowering the break-even cost for producers.
"This helps sharply cut some of the risk of drilling an offshore oil well and, we believe, sharply reduces costs for our customers," said Jim Sessions, a vice president of technology at Baker Hughes.
Graham Hill, an executive vice president at KBR Inc, detailed the construction company's plan for a cheaper floating production vessel, saying the new vessel fits producers' tight budgets. KBR can hope to earn more by selling extra features.
"This is like ordering a Ford," he said. "There's a base package, and you can add extras."
Richard Morrison, president of BP plc's Gulf of Mexico region, said the industry has accepted that crude prices will probably stay low, meaning oil producers like BP must work with services providers to reduce the multibillion dollar cost of offshore projects.
"That break even point can't come back to $80 a barrel, so I've got to figure out ways to work with my supplier over the long-term to keep that in check," he said during a presentation.
Morrison touted BP's use of new seismic imaging technology that helped identify 1 billion additional barrels of "possible resources" at four of its U.S. Gulf of Mexico offshore fields. The technology enhances existing seismic images to find oil hidden beneath salt structures deep underground.
Just weeks away is a coming Vienna meeting of the Organization of the Petroleum Exporting Countries where OPEC and other oil producers are to decide whether to continue production curbs past June.
If OPEC fails to continue the curbs, oil prices could fall again, making a difficult market worse, said Charles Cherington, a co-founder of Intervale Capital, a private equity investor in oilfield services.
Assuming OPEC continues the existing curbs, Cherington said the best the industry can hope for this year is crude "gets to the low to mid $50s (a barrel)" or half what it fetched at this time three years ago.
Few oilfield suppliers are generating steady profits, he said, and "in the short run, we don't see the market getting much better," he added.
Marc Gerard Rex Edwards, chief executive of rig provider Diamond Offshore Drilling (DO), on Monday reported its first quarter earnings declined on revenue down 25 percent from a year ago.

"I think we're beginning to see the signs of a bottom," he told Wall Street analysts, adding: "But I'm not exactly calling a bottom in the market at this particular moment in time."