China's Sinopec Corp completed adding a third tank to store liquefied natural gas at its receiving terminal in Tianjin, marking the completion of construction of the first phase of the import facility, the state oil and gas group said on Tuesday.

The terminal, in the northern port city Tianjin, near Beijing, began operations last February. It has an annual receiving capacity of 3 million tonnes and an annual supply capacity of 4 billion cubic meters (bcm).

The terminal has so far this year received 22 shipments of LNG that totaled 1.46 million tonnes in volume. It has delivered 1.46 bcm of the fuel by pipeline and 339,000 tonnes by gas trailers, the company said.

Sinopec operates two other terminals, one in Beihai in the southwest Guangxi region and one in Qingdao in the eastern province of Shandong.

The Chinese government has asked gas suppliers and distributors to boost storage capacity to cope with winter demand spikes. 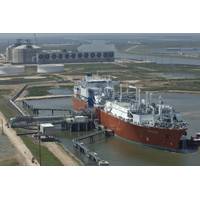