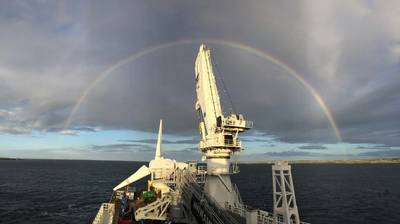 The developer of renewable and sustainable energy projects, Simec Atlantis Energy, has hailed progress at its MeyGen project – announcing that its 2019 performance represents a record period of uninterrupted generation from a tidal turbine venture of its kind.

In 2019 alone, MeyGen exported over 13.8GWh of predictable renewable electricity, equivalent to the average annual electricity consumption of around 3800 typical UK homes generating a revenue of £3.9m.

Phase 1A of MeyGen operates with 5 ROCs and had generated total revenues since operations commenced of £7.1m as at the end of 2019.

The AR1500 turbine is due to undergo maintenance and will be transported to land for servicing and upgrade work at the end of this month – redeployment at MeyGen is targeted for the Spring. The upgrade will increase the turbines revenue by 4% with no increase in the turbines operating cost.

During 2019, Atlantis announced its intention to develop the next phase of its MeyGen array which will see an additional 80MW of tidal capacity added to the existing project site between the island of Stroma and the mainland. Atlantis intends to design, consent and build the world’s first ocean-powered data center near the MeyGen site, connected to the tidal array via a private wire. A concept study has been completed with design underway to include a connection to the Celtic Norse subsea fiber optic cable currently in development, significantly enhancing Scotland’s international data connectivity. Atlantis is exploring connections to other international fiber optic cables as well.

The tidal array’s private wire structure with the data center will provide a route to market for the next phase of the project in lieu of subsidy support for tidal power in the United Kingdom.

Tim Cornelius, CEO of Atlantis, said: “I am delighted to report that MeyGen has now exported a remarkable 24.7GWh of predictable renewable energy. Not only is this world-renowned project helping the UK meet its Net Zero ambitions, but it is also providing valuable performance data which can be used to inform future projects, demonstrating MeyGen’s importance as a global prototype."

Tim added: “MeyGen holds a 398MW seabed lease and our data center expansion project is world leading for a number of reasons. The cost of tidal power continues to reduce and this is being assisted by the sustained pressure the offshore wind market places on the supply chain domestically and abroad."