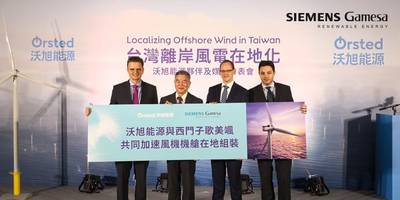 Wind turbine maker Siemens Gamesa will build an assembly plant in Taiwan if it gets a firm order from Denmark's Orsted to supply its 900-megawatt Greater Changhua offshore wind farm, the German-Spanish company said on Monday.

Siemens Gamesa, which is battling Denmark's Vestas for dominance of the global wind turbine market, said it had been chosen as the preferred supplier for the project. This is usually the first step towards a firm contract.

The assembly plant would be built near Taichung Harbor and be ready by 2021. The contract would involve 112 units of Siemens Gamesa's direct drive 8 MW turbines.

"It will enable us to establish a nacelle assembly facility in Taichung Harbor by 2021 upon Orsted's request, and ahead of local content requirements as set by the Taiwanese government."

Boosted by a plan to phase out nuclear power by 2025, Taiwan has emerged as the most promising offshore wind turbine market outside of Europe, attracting project developers such as Orsted and Germany's wpd as well as equipment makers.

MHI Vestas, a joint venture of Vestas and Japan's Mitsubishi Heavy Industries (MHVYF) and the world's second-largest maker of offshore wind turbines, has been chosen as the preferred supplier for three Taiwanese projects with a combined capacity of 900 MW.