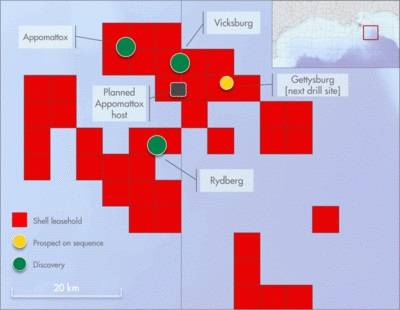 Royal Dutch Shell Plc said on Tuesday it had found roughly 100 million barrels of oil equivalent (boed) in the Gulf of Mexico's Norphlet formation, its third discovery there.

The company, the gulf's largest operator, found the oil near its Rydberg well, roughly 75 miles off the Louisiana coast.

The company drilled the well about 26,300 feet, including about 7,400 feet of water, and found oil reserves about 400 feet deep.

Shell is the project's primary operator, and partners with Ecopetrol SA (EC) and CNOOC Ltd's Nexen.