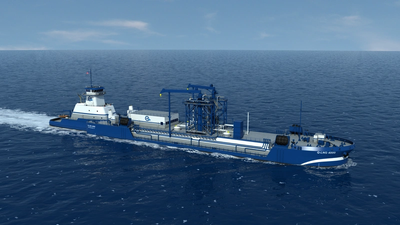 The global liquefied natural gas (LNGLF) (LNG) market has continued to defy expectations of many market observers, with demand growing by 29 million tonnes to 293 million tonnes in 2017, according to Shell’s annual LNG Outlook.
Such strong growth in demand is consistent with Shell’s first LNG Outlook, published in 2017. Based on current demand projections, Shell sees potential for a supply shortage developing in mid-2020s, unless new LNG production project commitments are made soon.
Japan remained the world’s largest LNG importer in 2017, while China moved into second place as Chinese imports surged past South Korea’s. Total demand for LNG in China reached 38 million tonnes, a result of continued economic growth and policies to reduce local air pollution through coal-to-gas switching.
“We are still seeing significant demand from traditional importers in Asia and Europe, but we are also seeing LNG provide flexible, reliable and cleaner energy supply for other countries around the world,” said Maarten Wetselaar, Integrated Gas and New Energies Director at Shell. “In Asia alone, demand rose by 17 million tonnes. That’s nearly as much as Indonesia, the world’s fifth-largest LNG exporter, produced in 2017.”
LNG has played an increasing role in the global energy system over the last few decades. Since 2000, the number of countries importing LNG has quadrupled and the number of countries supplying it has almost doubled. LNG trade increased from 100 million tonnes in 2000 to nearly 300 million tonnes in 2017. That’s enough gas to generate power for around 575 million homes.
LNG buyers continued to sign shorter and smaller contracts. In 2017, the number of LNG spot cargoes sold reached 1,100 for the first time, equivalent to three cargoes delivered every day. This growth mostly came from new supply from Australia and the USA.
The mismatch in requirements between buyers and suppliers is growing. Most suppliers still seek long-term LNG sales to secure financing. But LNG buyers increasingly want shorter, smaller and more flexible contracts so they can better compete in their own downstream power and gas markets.
This mismatch needs to be resolved to enable LNG project developers to make final investment decisions that are needed to ensure there is enough future supply of this cleaner-burning fuel for the world economy.
Email