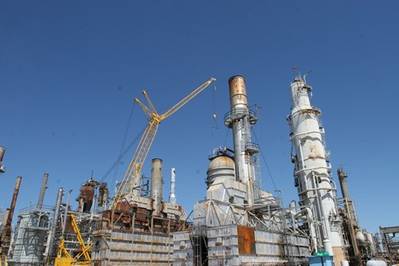 The settlement comes in the midst of the company's efforts to sell the refinery. The deal is subject to approval by a federal judge.

Petrobras did not respond to a request for comment.

Under the terms of the agreement, Petrobras subsidiary Pasadena Refining System Inc (PRSI) will pay $3.175 million to Houston-area municipal governments and school districts to convert fossil-fuel-burning vehicles to electric or hybrid models, according to the environmental groups, the Sierra Club Lone Star Chapter and Environment Texas.

The 112,229-barrel-per-day (bpd) refinery also will pay a $350,000 civil penalty to the U.S. government for releasing sulfur dioxide and other pollutants in excess of permitted levels and install new pollution control equipment at the refinery, according to the environmental groups.

The two organizations brought the lawsuit under a provision of the U.S. Clean Air Act that allows citizens to bring enforcement actions in federal court against polluters.

"We brought this suit to address the repeated mechanical breakdowns and operational flaws that have plagued the Pasadena refinery for years," said Neil Carman, clean air program director for Sierra Club's Lone Star Chapter. "These so-called 'emission events' have released millions of pounds of illegal air pollution into surrounding neighborhoods."

Petrobras in February put the refinery up for sale in a two-step process that began with a non-binding phase to allow potential buyers to look over the plant.

In May, Petrobras began the binding phase of the sale with qualified partners receiving strict instructions on how to proceed with due diligence. That phase is still under way.

Petrobras purchased half the refinery in 2006 and by 2012 was its sole owner, having sunk more than $1 billion into the plant. The purchase of the refinery was a target of the so-called Car Wash corruption investigation by Brazilian authorities. Brazilian audit court TCU said the refinery deal caused losses of more than $580 million to the company. (Reporting by Erwin Seba Editing by Leslie Adler)