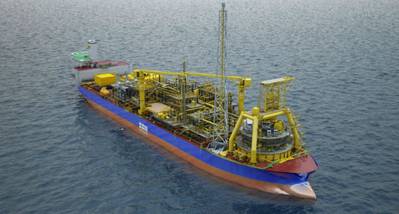 SBM Offshore has entered an agreement with Mitsubishi Corporation (MC) and Nippon Yusen Kabushiki Kaisha (NYUKF) (NYK Line) for the acquisition of a stake in the joint venture companies incorporated for the purpose of owning and operating Floating Production Storage and Offloading (FPSO) Turritella, the company announced today.
Mitsubishi Corporation (30 percent interest) and NYK Line (15 percent interest) have acquired a 45 percent combined stake in the joint venture companies. SBM Offshore, MC and NYK Line are also partners in other joint venture companies incorporated for the purpose of owning and operating FPSOs such as Cidade de Maricá and Cidade de Saquarema.
The partners' cash contribution to the Turritella joint venture companies is expected to total approximately $590 million with the first milestone payment of $446 million received today, SBM Offshore said, adding that future milestone payments will follow the stages of completion of the project.
The divestment proceeds have been anticipated in the company's 2015 proportional net debt guidance of below $3.5 billion. FPSO Turritella is currently under construction in Singapore and is expected to be delivered and on-hire in the first half of 2016.
SBM Offshore announced on July 22, 2013 that it had signed contracts with Shell Offshore Inc. to supply and lease a FPSO for the Stones development project in the Gulf of Mexico. The contracts include an initial period of 10 years with future extension options up to a total of 20 years. Start-up of the facility continues to be expected in the first half of 2016.
The Stones development is located in 2,896 meters (9,500 feet) of water approximately 320 kilometers (200 miles) offshore Louisiana in the Walker Ridge area. When installed, Turritella will be the deepest FPSO development in the world.
The converted Suezmax FPSO will have a turret with a disconnectable buoy (Buoyant Turret Mooring or BTM) allowing it to weathervane in normal conditions and disconnect from the FPSO upon the approach of a hurricane. The BTM will be configured with Steel Lazy-Wave Risers which will be a first application for a disconnectable FPSO. The mooring system will also incorporate the ability to adjust line tension during operations by use of an In-Line Mooring Connector. SBM Offshore's over 30 years of turret experience including the delivery of nearly 50 systems will be leveraged to supply this pioneering BTM system.
The FPSO is a typical Generation 2 design with a processing facility capacity of 60,000 barrels of oil per day (bopd) and 15 mmscf/d of gas treatment and export. No water injection facilities are specified. The Suezmax hull will be able to store 800,000 barrels of crude oil and total topsides weight will reach 7,000 tons.
Email