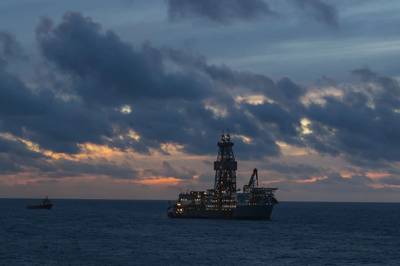 For Illustration - Image by Ranimiro - AdobeStock

Oilfield services companies have collectively lost almost half of their market capitalization, hit by the combination of the coronavirus pandemic and low oil prices, with offshore drillers, in particular, the most affected, Norway's Rystad Energy has said in its analysis released on Friday.

"It is widely acknowledged that the oilfield services sector (OFS) is the energy world’s worst-hit market from the Covid-19 pandemic. What is staggering is the extent that the capitalization of listed OFS companies has fallen," Rystad said.

Analyzing a representative group of 116 listed OFS companies, accounting for around 71% of the traded equities in the sector in 2019, Rystad Energy found that the firms have lost approximately 49% of their market capitalization since the beginning of this year.

According to Rystad, the best performers among service companies were in the Engineering, Procurement, Construction and Installation (EPCI) sector, which only saw market capitalization drop by 27% compared to the value erosion of between 39% and 54% for most other service segments. The most affected stocks were in offshore drilling, a segment that has nosedived by about 80% since the beginning of this year, Rystad said.

“In a nutshell, our analysis indicates that companies with exposure to EPCI, facility leasing, maintenance and inspection services, SURF or subsea equipment have been less punished by investors, who have prioritized limiting their exposure to well services, drillers, acquisition contract seismic and the North American market,“ says Rystad Energy senior energy service analyst Binny Bagga.

Another general trend is that share prices of companies that have consistently paid dividends/distributions over the past years have dropped less than non-dividend-paying companies.

One explanation for the EPCI performance is that a significant proportion of EPCI company revenues stems from industries outside of the oil and gas sector. Another respite for the EPCI segment is that the average contract cycle time is longer than for most other segments, which means that these companies are more likely to be busy with existing projects even if new sanctioning activity is low, Rystad explains. 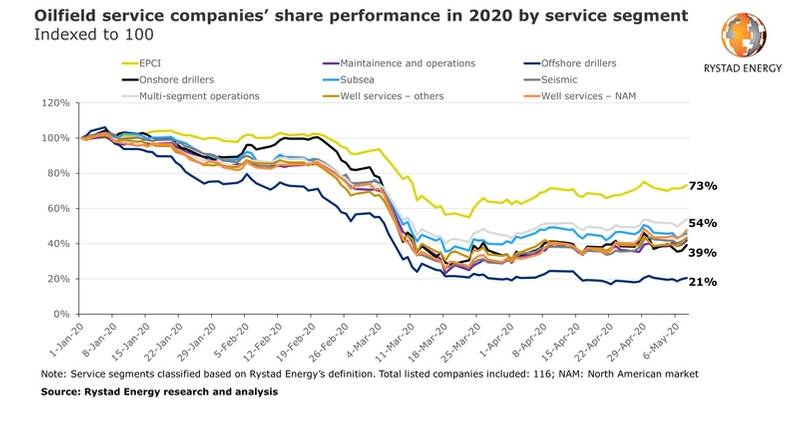 The second-best-performing service segment consists of companies with multi-segment operations, and three elements stand out in particular here, Rystad says.

First,  the company explains, this segment index is positively impacted by large-cap companies, especially those with significant exposure to EPCI, facility leasing, inspection, and maintenance services. Most of the better-performing names also have diversified geographical exposure.

Secondly, the index performance, in general, is negatively impacted by companies dependent on North American well services. Lastly, about half of the companies in this service segment index have consistently paid dividends over the past three years. Most of these companies have been rewarded with a better share price performance or less market value erosion compared to non-dividend-paying companies.

As for the subsea service segment, Rystasd says that investors seem to be more favorably inclined toward companies with a larger exposure to SURF (Subsea Umbilicals, Risers, and Flowlines) and subsea equipment than to companies only exposed to subsea services. This is to a great extent driven by longer contract durations for the former group.

When it comes to maintenance and operations, Rystad says the segment’s performance is adversely impacted by offshore vessel companies, whose shares have dropped more than companies in facility leasing and other maintenance and operations. The companies within this segment already had excess capacity overhang challenges when this downturn began, and are now exploring every possible strategy to survive, Rystad says.

Rystad has found that around three-quarters of the companies in the seismic and G&G service segment index, have seen their market cap erode by more than 60% this year.

This segment is highly vulnerable to exploration cost cuts by E&P operators, and to complicate matters further the segment’s average contract recycle duration is around two years, Rystad says.

The plight of well services companies with strong exposure to the North American (NAM) region is well known in the market. More than half of the companies in our NAM well services index have had market cap erosion of more than 60% this year, with some players slumping more than 80%.

Overall this segment is plagued by little service differentiation, which is expected to have a profound impact on pricing and utilization as E&P operators continue to slash their budgets, Rystad says.

"The story is much the same for onshore drillers, as share performances and investor appetite for North American-leveraged land drillers have quickly taken a turn for the worse. Our analysis indicates that international exposure is proving beneficial, especially to the Middle East, which is expected to be more resilient than North and South American markets," Rystad explains.

Offshore drillers have it worst

Many offshore drillers, the worst-performing service segment, are in the process of exploring financial restructuring options, while some of the others have engaged in share repurchase options to shore up stock prices, Rystad said.

"Finally, looking at company size, our analysis indicates that large-caps have outperformed the small-cap and micro-cap shares in the OFS market. Furthermore, the share performance gap between large-caps and other categories has widened in recent weeks," the company explained.

“The result of this crisis will likely be more financial restructuring and consolidation to right-size the capital base across the service segments. Additionally, we will see more companies canceling dividend payments and resorting to poison pills and reverse stock splits as the time goes by,“ Bagga concludes.