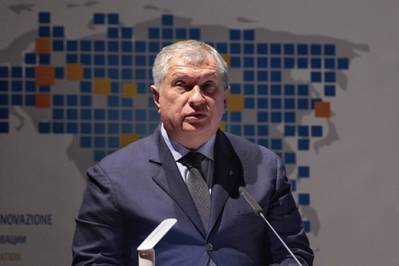 A return to oil production curbs by OPEC and its allies next year cannot be ruled out, two sources in the Organization of the Petroleum Exporting Countries said on Wednesday, in an effort to avert a supply glut that could weigh on prices.

Some Russian companies, including Rosneft, opposed voluntary production cuts in the past, citing the risk of losing global market share to other countries and a need to maintain profitability.

According to the list of Thursday's attendees, seen by Reuters, Rosneft was represented at the meeting by Vladimir Feigin, head of a Moscow-based energy think-tank.

He was listed as an adviser to Rosneft Chief Executive Igor Sechin, a critic of OPEC and long-standing ally of President Vladimir Putin.

Rosneft, which accounts for 40 percent of Russian oil output, declined to comment. Such events in the past were attended by high-ranking Rosneft officials, such as Pavel Fedorov, first vice-president for economics and finance.

Russia has been cranking up oil production to capitalize on high prices, raising output to a 30-year high of 11.41 million barrels per day last month.

Sechin said last month that Rosneft could increase production by the end of the year.

The meeting at the Russian Energy Ministry took place before a gathering of the Joint Ministerial Monitoring Committee (JMMC) in Abu Dhabi on Sunday.

JMMC monitors implementation of the 2016 Vienna accord on oil production cuts between OPEC and other producers led by Russia. In June, the pact's participants decided to ease the curbs as production cuts had been much deeper than envisaged.

The head of mid-sized oil producer Russneft, Evgeny Tolochek, said after the meeting on Thursday that oil production cuts had not been discussed.