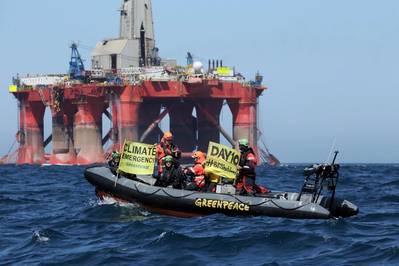 A BP drilling rig reached its destination in the North Sea on Wednesday after 11 days of delays due to Greenpeace protests over climate change, the activist group said.

The 40,000-metric-ton Paul Loyd JNR left Cromarty Firth, north of Inverness, Scotland last Friday, after being held for six days by activists who had climbed and camped out on one of its legs.

Once at sea, the rig and its support vessels were forced to turn away three times after Greenpeace's Arctic Sunrise ship prevented it from reaching the Vorlich oilfield to start its drilling campaign.

The rig finally reached its destination on Wednesday afternoon, Greenpeace said. According to the ship tracking website marinetraffic.com, the vessel was anchored.

BP did not reply to a request for comment.

BP announced last year plans to invest 200 million pounds ($251.16 million) to develop the Vorlich field in the central North Sea which holds some 30 million barrels of oil and gas equivalent.

It is expected to start production in 2020 with an output of 20,000 barrels per day, according to BP's website.