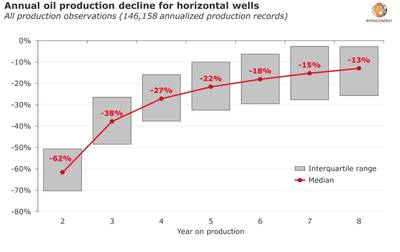 Though the Permian Basin still dominates US land drilling, the pace of growth in this region has slowed significantly.

Older tight oil wells decline by 20% per year without material intervention, according to Rystad Energy.

Contrary to common belief, the Permian Basin systematically offers the lowest oil decline rates, along with the Bakken Shale.

In turn, the Eagle Ford and DJ basins exhibit steeper decline rates throughout the first eight years of production across most vintages.

Rystad Energy has examined all horizontal oil-producing wells in the Bakken, Eagle Ford, Permian and DJ Basins, turned-in-line between 2011 and 2017 with at least 24 months of reported production.