Posti to Use LNG Vehicles 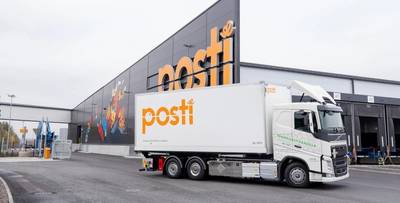 Posti will be using the LNG vehicles for demanding transport operations. Posti's target is to reduce carbon dioxide emissions in proportion to net sales by 30% by 2020.

Posti will be using the LNG-powered vehicle combinations for demanding transport operations on routes including Vantaa–Oulu, Vantaa–Lappeenranta and Vantaa–Turku.

Environmental performance in Posti’s transport is improved by combining transports, ensuring high filling and capacity utilization rates and using eco-driving techniques. Posti regards alternative heavy-duty vehicle fuels such as LNG and ethanol diesel as one of the opportunities available to curb global warming.

“Our target is to reduce carbon dioxide emissions in proportion to net sales by 30% by 2020. To reach this target, we need several different measures, and one of these is using alternative fuels such as LNG. We want to contribute to action against climate change and at the same time act as a responsible example. Over the past ten years, we’ve reduced our absolute carbon dioxide emissions by more than 34,000 tonnes,” says Noomi Jägerhorn, Head of Sustainability, Posti Group.

”We’ve been cooperating with Posti for a long time. Posti has 40 biogas-fueled delivery vehicles in its fleet. LNG is one way of curbing global warming in heavy-duty transport in particular. LNG-powered vehicles can also switch to 100% Finnish and renewable liquefied biogas (LBG) without any special capital outlays,” says Sales Manager Juha-Matti Koskinen from Gasum.