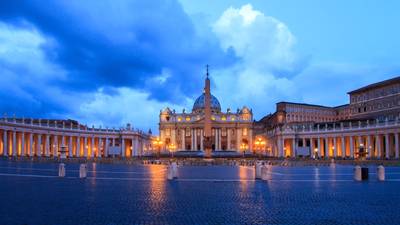 Pope Francis warned that climate change risked destroying humanity on Saturday and called on energy leaders to help the world to convert to clean fuels to avert catastrophe.

"Civilisation requires energy but energy use must not destroy civilisation," the pope told top oil company executives at the end of a two-day conference in the Vatican.

Climate change was a challenge of "epochal proportions", he said, adding that the world needed an energy mix that combated pollution, eliminated poverty and promoted social justice.

The conference, held behind closed doors at the Pontifical Academy of Sciences, brought together oil executives, investors and Vatican experts who, like the pope, back scientific opinion that climate change is caused by human activity.

"We know that the challenges facing us are interconnected. If we are to eliminate poverty and hunger ... the more than one billion people without electricity today need to gain access to it," the pope told them.

"Our desire to ensure energy for all must not lead to the undesired effect of a spiral of extreme climate changes due to a catastrophic rise in global temperatures, harsher environments and increased levels of poverty," he said.

Climate Goal
The oil and gas industry has come under growing pressure from investors and activists to play a bigger role in reducing greenhouse gas emissions to meet goals set out in a 2015 climate agreement signed in Paris.

Companies are betting on increased demand for gas, the least polluting fossil fuel, and to a lesser extent on renewable power such as wind and solar to meet global targets of net zero emissions by the end of the century.

Francis, who wrote a major document called "Laudato Si" (Praised Be) on protecting the environment from global warming in 2015, said it was "worrying" that there still was a continuing search for new fossil fuel reserves.

He said the transition to accessible and clean energy was "a duty that we owe towards millions of our brothers and sisters around the world, poorer countries and generations yet to come".

The pope also called for a global, long-term common project:

"Environmental and energy problems now have a global impact and extent," he said.