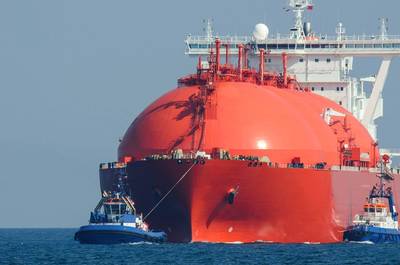 Poland's desire to cut natural gas imports from Russia has led to an "understanding" with the United States to work toward a deal to export liquefied natural gas (LNGLF) to its new Baltic Sea terminal, the country's deputy prime minister said on Wednesday.
Mateusz Morawiecki, who is also the minister of economic development and finance, said in an interview that discussions with new U.S. Energy Secretary Rick Perry brought "a very positive response."
"The word agreement is probably premature. Understanding? Absolutely," Morawiecki said as he wrapped up a three-day U.S. visit with stops in Washington, Boston and New York.
Poland's liquefied natural gas (LNG) terminal in the Baltic Sea was completed in 2015 and opened last year. It has an annual capacity of 5 billion cubic meters, which the government wants to double in the next few years, Morawiecki said.
Internal sources supply 30 percent of Poland's gas consumption, with the rest predominantly from Russia, which Warsaw eyes with suspicion.
Once procedural issues are settled and viable export capacity is found, "the last element which is to be negotiated is the price," he said, noting that gas from Russia, Algeria and Qatar is competitive.
"The average price is lower than what we can obtain from Texas, from the United States. A little way to go, but I hope we will find a common denominator," he said.
In February 2016 the United States began exporting LNG from the lower 48 states for the first time. None of that gas, an estimated $895 million worth in the first year, made it to Poland or northern Europe because of cheaper sources from Russia and Norway.
Poland is considering adding more LNG capacity by building a floating LNG terminal in the Baltic Sea by 2021.
Poland's expanding economy would help support the added capacity. Economic growth of 3.5 percent in the first quarter and "3.6 percent or higher" for 2017 is possible, Morawiecki said.
He said he was not concerned by the recent strength of the Polish currency, as long as it remains in the 4 to 4.5 per euro range.
"With the recent strengthening where zloty touched 4.21 to the euro, it was perceived as quite strong, but it is still quite a good exchange rate for our exporters," he said.
GAS IS NATIONAL SECURITY
Finding alternative gas sources is important for Poland's national security.
Poland's contract to buy gas from Russia's state-owned Gazprom expires in 2022. Replacing the roughly 10.2 bcm of Russian gas each year from its annual consumption of 15 bcm to 16 bcm is a top priority, as it would reduce any leverage Moscow has over its former vassal state.
Poland, a member of the North Atlantic Treaty Organization, is on the frontline between a buildup of both Russian and NATO military forces, unprecedented since the end of the Cold War. The buildup has been driven by Russia's annexation of Crimea and accusations, denied by Moscow, that it is supporting a separatist conflict in eastern Ukraine.
"I am very much concerned. I think that what Russia is doing since invading Georgia in 2008 and Ukraine in 2014, it is clearly against international public law," Morawiecki said.
"We strongly oppose this expansionary and aggressive policy by Russia. Cyber threats to the Baltic States and Poland are difficult to overestimate. I believe this is a real threat. We have to be very much in partnership with NATO and EU countries," he said.
Poland's western flank has been shaken by Britain's decision to leave the European Union in 2019, referred to as Brexit.
"In the context of Brexit, NATO could become more and more important from a political point of view. It could become a more viable political and not only military platform in the context of the UK," he said.
Morawiecki said he was more optimistic than most about the financial impact from Brexit, believing the UK would still make monetary contributions to the EU either directly or indirectly, similar to what Switzerland via treaties and Norway via membership in the European Economic Area contribute.

"But we would like to maintain the (UK) contribution as much as possible," he said.