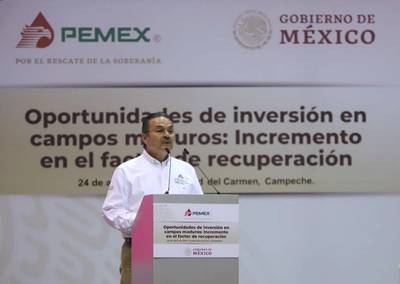 Petroleos Mexicanos swung to a 35.7 billion peso ($1.84 billion) net loss during the first quarter as revenues and crude output at the heavily-indebted Mexican state oil company fell, results posted to the stock exchange showed on Tuesday.

Revenues at Pemex were 356.3 billion pesos during the January-March period, down 10.4 percent from 397.4 billion pesos in the same period in 2018, the results showed.

Pemex, which President Andres Manuel Lopez Obrador has pledged to revive after years of decline, posted a profit of 113.3 billion pesos in the first quarter of last year.

Rating agencies have warned that Pemex, which had debt of $106 billion at the end of 2018, runs the risk of having its investment grade credit rating cut to junk.

Loss of the investment grade rating would be a major blow to the administration of Lopez Obrador, a veteran leftist politician who took office in December.

Pemex said it had reduced its financial debt by 0.9 percent during the first quarter compared to the end of last year. However, the peso has strengthened against the dollar since then and the debt now stands at $106.5 billion, the company said.

Production of crude oil was 1.66 million barrels per day (bpd), a drop of nearly 12 percent from the first quarter of 2018, Pemex said. Output at the company is now half what it was when production peaked at almost 3.4 million bpd in 2004.

Pemex executives told a conference call that they expected output to pick up and average 1.725 million bpd this year.

Still, the economy has made an inauspicious start to 2019, shrinking by 0.2 percent quarter-on-quarter during the first three months, according to preliminary data.

Lopez Obrador aims to reverse the decline in output and get crude production back to almost 2.5 million bpd by the time he is due to leave office near the end of 2024.