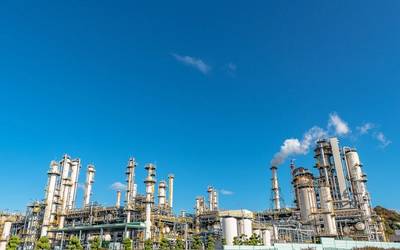 Oil futures rose on Tuesday with the help of an increase in global stock markets, an outage reducing Libyan crude production and a gradual decrease in Russian output.

"The complex is getting a lift from a pop in global risk appetite this morning as underscored by a strong advance in U.S. equities," Jim Ritterbusch, president of Ritterbusch and Associates in Chicago, said in a report.

U.S. stocks jumped on Tuesday, rising for a second day in a row, led by technology companies on signs of progress between China and the United States to resolve their trade dispute, which has roiled the markets for months.

A further boost came from a shutdown in production in Libya, where the National Oil Company (NOC) declared force majeure on Monday on exports from the El Sharara oilfield, the country's biggest, which was seized last weekend by a militia group.

NOC said the shutdown would result in a production loss of 315,000 barrels per day (bpd), and an additional loss of 73,000 bpd at the El Feel oilfield.

To shore up oil prices which have tumbled by 30 percent since a peak above $86 in October, the Organization of the Petroleum Exporting Countries, Russia and their allies agreed last week to cut output by a joint 1.2 million bpd from January.

But analysts said the reductions may not be enough to restore balance to the market.

"There remains a lot of uncertainty if the production cut is thick enough to make a significant dent in global supply," said Stephen Innes, head of trading for Asia-Pacific at futures brokerage Oanda in Singapore.

The market will get a peak at U.S. oil inventories this afternoon when the American Petroleum Institute (API), an industry group, releases a report at 4:30 p.m. EST. Analysts estimated crude stocks declined 2.9 million barrels last week, according to a Reuters poll.

Money managers, meanwhile, cut their bullish bets on Brent and WTI crude futures and options to the lowest level in three years.

(Reuters, By Scott DiSavino, Additional reporting by Amanda Cooper in London and Henning Gloystein in Singapore; Editing by Marguerita Choy and Edmund Balir)