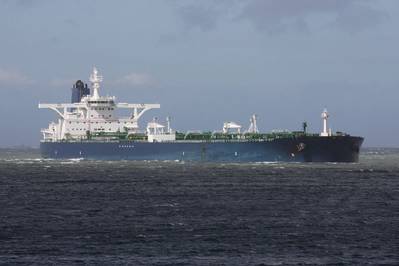 Oil prices edged lower on Friday and were on track for weekly losses, weighed down by rising OPEC exports and strong output from the United States.
Brent crude futures, the international benchmark, were trading at $51.76 a barrel at 1141 GMT, 25 cents below the last close and heading for a fall of close to 1.5 percent on the week.
U.S. West Texas Intermediate (WTI) crude futures were 30 cents lower at $48.73 per barrel and were set to drop by around 2 percent for the week.
Analysts said prices were pressured by rising output, although strong demand limited the losses.
"Increasing OPEC production and increasing OPEC exports are the reason the market has been trading lower," said PVM Oil Associates analyst Tamas Varga.
While the Organization of the Petroleum Exporting Countries is leading cuts of 1.8 million bpd along with some non-members such as Russia, its July exports rose to a record high, according to a report by Thomson Reuters Oil Research.
July's exports of 26.11 million barrels per day (bpd) was a rise of 370,000 bpd, with most coming from Nigeria.
A Reuters survey also showed OPEC oil output at 2017 highs in July, led by Libyan gains. Both Libya and Nigeria were exempt from OPEC's output cut deal.
Output in Russia is also high. Russia's largest oil producer Rosneft said its crude oil output grew by 11.1 percent year-on-year in the second quarter.
In the United States, oil production has hit 9.43 million bpd, the highest since August 2015 and up 12 percent from its most recent low in June last year. <C-OUT-T-EIA>
Barclays bank said: "we expect a downward (price) correction during this quarter," but forecasts Brent at an average of $54 per barrel during the fourth quarter.
Still, prices were still more than 16 percent above the lows hit in June, as strong summer demand for transport fuel has buoyed benchmark contracts.
U.S. gasoline demand rose to a record 9.842 million bpd last week, according to government data this week.
"Gasoline demand is now +0.1 percent (year-on-year). This is reasonably encouraging given it had been flat or negative since late November 2016," U.S. investment bank Jefferies said.
"Gasoline inventories in the U.S. fell for the seventh consecutive week ... and are now only 6.3 million barrels above the 5-year average," it said.