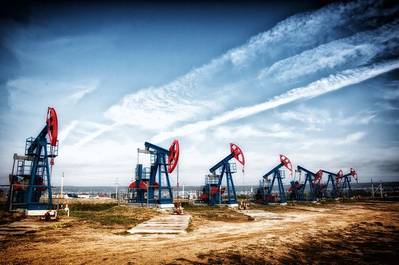 Oil rose on Thursday, encouraged by a weaker dollar and evidence of strong U.S. fuel demand, though demand prospects remain clouded by the turmoil engulfing emerging markets and an escalation in the U.S. trade dispute with China.

Emerging market stocks, bonds and currencies have plunged in recent weeks in response to financial crises in the likes of Turkey, South Africa and Venezuela.

The dollar eased by about 0.2 percent against a basket of major currencies on Thursday. But it has gained 3.3 percent this year and has benefited from the flight out of emerging-market assets. As a result, major oil consumers are finding their import bills rising quickly.

"In the last week we've seen the focus shift again from supply back to demand and the continued calamity in emerging market stocks, bonds and currencies is weighing on the medium and longer-term demand outlook," said Saxo Bank senior manager Ole Hansen.

"We did see quite a lot of momentum last week and then oil was shot down in flames after its failed attempt to break above $80 ... now we have the extra dimension of a spike in oil prices that can only increase the pain (for consumers) and the risk of a slowdown in demand."

The market is already preparing for the loss of at least 1 million barrels per day (bpd) in Iranian crude supplies from early November, when U.S. sanctions against Tehran come into force. The oil price has risen by 3 percent since the U.S. government announced the sanctions in May.

"The million-dollar question is how much Iranian oil will be lost after Nov. 4 when the second round of sanctions kicks in?" said PVM Oil Associates strategist Tamas Varga.

"If it is around 1 million bpd, or more, as expected, the fragile supply/demand balance will be upset and oil prices will stay supported."

The Organization of the Petroleum Exporting Countries (OPEC) on Wednesday said it expected global oil demand to break through 100 million bpd for the first time this year.

A further risk is seen in OPEC-member Venezuela, where a government and political crisis has halved oil production in the past two years to little more than 1 million bpd.

David Maher, managing director for energy at commodity trading house RCMA Group, said Venezuela's "declines will continue" as a "lack of cash and infrastructural collapse (are) not easy to fix".


By Amanda Cooper, Additional reporting by Henning Gloystein in SINGAPORE