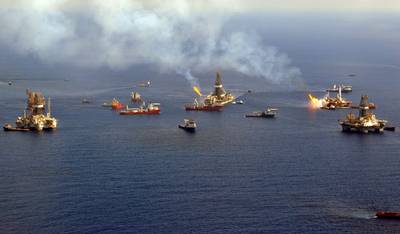 The Discoverer Enterprise, Q4000 and many other vessels work around the clock cleaning up the Deepwater Horizon oil spill in the Gulf of Mexico. (Photo: SGT Casey Ware, U.S. Army)

The U.S. government agency created after the 2010 Deepwater Horizon oil spill plans in coming weeks to unveil tougher financial requirements for offshore oil producers aimed at protecting taxpayers from the risk of cleaning up abandoned oil rigs, an agency executive told Reuters.
Under the new guidelines, the Bureau of Ocean Energy Management (BOEM) will demand additional guarantees to cover producers' legal obligation to plug offshore wells and dismantle rigs in the Outer Continental Shelf once they have extracted oil and gas, according to Renee Orr, chief of Strategic Resources at the agency.
Currently, companies are exempt from providing supplemental bonds for the cleanup-process, known as decommissioning, if the total estimated liability is less than half of their net worth.
The stricter bonding rules, which will demand more capital of more companies, were proposed by the federal agency in September and will be implemented this year, Orr said.
They follow more than 80 bankruptcy filings by North American oil and gas producers since the beginning of 2015, when plunging oil prices gripped the sector, triggering concerns at the agency that companies would walk away from clean-ups.
"BOEM's primary goal is to ensure that the U.S. taxpayer never has to pay for decommissioning OCS facilities," Orr said in an interview.
Randall Luthi, president of National Ocean Industries Association, which represents the U.S. offshore energy industry, said in an interview: "We're looking forward to being able to review the guidance in detail and are hopeful that it provides flexibility to both the agency and the industry."
If a company defaults on its financing obligations, the government will track down previous owners or operators of the wells, Orr said.
Leases on many of the wells were originally owned by oil majors like BP, Royal Dutch Shell PLC (RYDAF), Exxon Mobil Corp and Chevron Corp.
Balance Sheet Pressure
Under the new rules, companies will be exempt from providing additional clean-up guarantees only if the total estimated liability is less than 10 percent of a company's net worth.
It will be particularly difficult for companies to meet the new criteria given that net worth, which is closely tied to the value of proven reserves, has shrunk during a prolonged oil price slump.
This could pose a hurdle for producers that are already struggling to make interest payments on their debt, some restructuring advisers said.
"Bankruptcies have triggered BOEM's enthusiasm for bonding, but as industry groups have commented, the proposed cure may actually put more of them into bankruptcy," said Poe Leggette, co-leader of law firm BakerHostetler's energy team, which represents offshore producers.
To mitigate financial risk for the companies, the government is working with small and large producers to craft tailored financial plans, Orr said.
The agency already has met privately with dozens of oil-and-gas producers and insurers to lay out its new rules, which may permit additional forms of security previously not allowed, such as third-party guarantees and U.S. treasury notes, she said.
Two energy exploration and production companies, Stone Energy and W&T Offshore, have been told by the agency that they no longer qualify for bonding exemptions for their Gulf of Mexico operations under the current rules.
Both companies said in SEC filings that they are in discussions with the agency to meet its demands for hundreds of millions of dollars in guarantees to cover offshore clean-ups.
In separate SEC filings, Stone Energy said it was considering a prepackaged bankruptcy petition, while W&T announced debt restructuring talks with its creditors. Neither company responded to requests for comment.