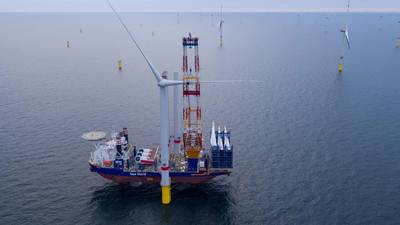 Offshore wind farm developer Northland Power (NPIFF) has decided to give up on the Demonstrator Project - the installation of two turbines using mono bucket foundations - at its Deutsche Bucht wind project in the North Sea.

The company in February said Demonstrator Project had been paused in the fourth quarter of 2019 following the identification of technical issues. It then warned that, while a thorough evaluation was ongoing, there was possibility that the Demonstrator Project might not go ahead.

The Mono Bucket foundation structure consists of a single steel cylinder, known as a “suction bucket”, upon which is mounted a shaft. The advantage of the suction bucket construction is that its own weight and vacuum pressure causes it to become firmly embedded in the sea floor. This method eliminates the need for pile driving, and consequently, for noise mitigation measures such as big bubble curtains.

However, on Tuesday, March 17, Northland Power said:"An evaluation of the cause of the technical issues is underway and will not be completed until mid-year.  Due to the timing issues associated with the technical review, among other considerations, Northland has elected to permanently forego the installation of the Demonstrator Project."

Deutsche Bucht will encompass the 31 monopile foundations and turbines, which were installed and operational, ahead of schedule, with a total productive capacity of 252 megawatts. The 31 turbines have generating power since the end of September 2019 and contributed pre-completion revenues in sales of $96 million in 2019.