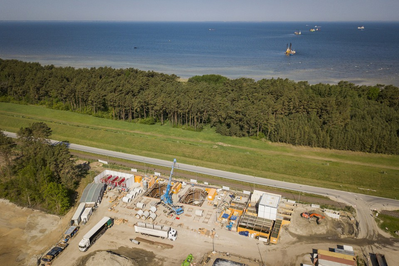 The Nord Stream 2 pipeline to transport Russian gas to Germany is progressing on schedule, its operator said on Friday, with European investors still committed to the project despite criticism from the United States and the threat of sanctions.

In July, Washington repeated a warning to Western firms invested in the pipeline that they were at risk of sanctions, saying Moscow was using the project to divide Europe.

Berlin and Moscow have been at odds since Russia annexed Crimea four years ago, but they have a common interest in the Nord Stream 2 project. The pipeline will allow Russia to bypass Ukraine, where its gas giant Gazprom has faced past disruptions.

Disputes between Gazprom and Ukraine, a key Russian gas export route, over gas prices and transit fees have resulted in a number of supply stoppages to Europe in the past decade.

"The project is progressing according to schedule," Nord Stream 2 AG, the Swiss-based project's operating company, told Reuters in an emailed statement. Gas is due to start flowing at the end of 2019 to bypass routes through Ukraine.

Nord Stream 2 AG, which will double the existing Nord Stream 1 capacity from a current 55 billion cubic metres of gas a year, is owned by Gazprom, which is taking on half of the planned costs of 9.5 billion euros ($11 billion).

By the end of June, 4.8 billion euros had already been invested in the 1,200-kilometre (746 miles) pipeline project, and pipelaying in the Baltic Sea started in July.

"Uniper will remain one of the financing partners of this project and we are - as before - fully committed to the project," Uniper's Chief Financial Officer Christopher Delbrueck said in a statement this week. "We will continue to adhere to our contractual obligations to Nord Stream 2."

Austria's OMV has spent 465 million euros on the project so far, it said in a written reply to a Reuters request. That represents half of the around 950 million euros each Western company pledged to commit in financing.

"We are monitoring the situation very closely... We trust, and our experience showed us so far, that U.S. sanctions are not being done to harm European companies," OMV said.

Gazprom and its European partners say the Nord Stream 2 project is aimed at ensuring energy security in the region as gas production falls in Europe and as Gazprom remains in conflict with Ukraine.

Shell declined to comment. Engie said in a written reply to a Reuters request that it has already invested between 400 million and 450 million euros in the project, out of 950 million euros it will invest in total.

"At this stage, Engie is not considering speeding up its investment in the project," Engie said.

A Wintershall spokesman said that the company was "following developments" in the United States closely, declining to comment further.