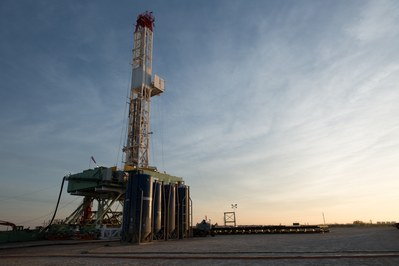 West Texas Intermediate (WTI) light crude futures averaged at $62.89 per barrel during the quarter, up 21.5 percent from a year earlier.

Noble, which drills oil wells in the DJ Basin as well as the Permian and Eagle Ford shale plays, said sales volumes for onshore shale oil rose 37.3 percent to 103 thousand barrels of oil equivalents per day.

The company's shares were down 3 percent at $32.8 in early trade amid a broader drop in WTI light crude prices.

Net income attributable to Noble soared to $554 million, or $1.14 per share, in the quarter ended March 31 from $36 million, or 8 cents per share, a year earlier, helped by a gain of about $795 million from asset sales.

Excluding items, it earned 35 cents per share, beating the average analyst estimate of 25 cents, according to Thomson Reuters I/B/E/S.

Total sales volume fell 5.5 percent to 361 thousand barrels of oil equivalents per day (MBoe/d). The company said it has adopted a new accounting method, ASC 606, in which total sales volumes came in at 370 MBoe/d.

Reporting by Taenaz Shakir in Bengaluru