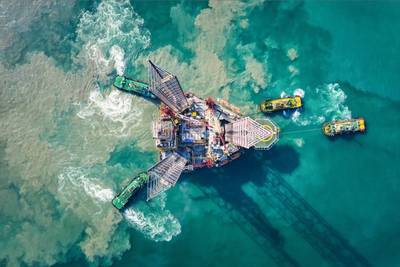 Newly licensed offshore oil and gas exploration acreage is likely to fall by about 60% and onshore acreage by 30% compared with 2019 levels, Rystad Energy has said, as the Norwegian energy market analytics company expects more than half of the world’s planned licensing rounds to be canceled this year due to the combined effect of the COVID-19 pandemic and the low oil prices.

"This year was slated to be another remarkable year for exploration with about 45 countries launching at least 52 lease rounds, about 60% of them in offshore areas. The decline in the expected number of lease rounds compared to last year’s 69 was not a sign of fewer countries offering new licenses, but a result of several countries offering multiple rounds in 2019, including Brazil, Ukraine, India and the United States," Rystad said.

In its analysis, Rystad Energy has evaluated the rounds and distributed them in three categories: likely, tentative and unlikely to take place.

“The unlikely upcoming lease rounds represent around 54% – a worrisome sign for global exploration. A number of factors together make these rounds unlikely to go ahead, including the oil-price drop, a global cut in investments by almost 20%, a lack of skilled manpower due to the Covid-19 pandemic, fiscal regimes that are proving unattractive in the current environment, and a lack of interest among potential participating companies,“ says Rystad Energy’s senior upstream analyst Aatisha Mahajan.

In Europe, unlikely rounds are those of the United Kingdom, Ukraine, Romania and Germany. In South America, rounds in Colombia, Brazil, Ecuador and the Dominican Republic may not go ahead, while in Asia rounds in Thailand, Uzbekistan, Myanmar and the UAE may be put on ice. New Zealand is also in doubt, and in Africa, licensing rounds in Ivory Coast, Algeria, Tanzania, Senegal, Somalia, Liberia, Ghana, Equatorial Guinea, Angola, South Sudan and Nigeria may also be put on hold, Rystad said.

The United States, Suriname, Egypt, Russia, and China make up the list of countries where licensing rounds hang in the balance and are marked as tentative. The United States recently concluded its lease round 254 in the Gulf of Mexico with digital technology playing a big role and the sale process was streamed live.

"Suriname is developing into a hotspot for global exploration with two major discoveries in recent months. Riding on these successes, the South American nation might be able to go ahead and conclude a successful round. However, economics will play a role depending on how the future oil price is formulated for the participating companies," Rystad said.

Egypt is a very prospective region and has open-door licensing, under which we might witness the willingness to participate from companies with significant free cash flow. Russia and China both have local players as the common bidders in licensing rounds and might therefore still go ahead with their scheduled rounds.

Licensing rounds that are likely to go ahead include countries such as Malaysia, Trinidad and Tobago, Norway, India, Lebanon, and Canada. According to Rystad, these countries look well on track to continue their lease rounds as scheduled, although the current industry volatility could cause slight delays. India is planning to combine the OALP (Open Acreage Licensing Policy) with Round 5&6, and these blocks will be up for grabs in July.

Canada plans to go ahead with its offshore Labrador region. Trinidad and Tobago is riding on its significant exploration success having discovered around 400 million barrels of oil equivalent (boe) in 2019 and seems to be better placed with interested parties among the active players in the region combined with a mild outbreak of Covid-19 so far.

Norway intends to proceed with its annual awards in pre-defined areas (APA) round of all mature, unlicensed acreage, and has proposed adding 36 deepwater Norwegian Sea blocks to the available area.

Eight of the initially expected 52 licensing rounds have already been completed, in Barbados, Canada (C-NLOPB 2020), the US (Lease Sale 254), Gabon, Pakistan, Oman, Australia and Republic of the Congo.

"As the decline comes from a lower level than it did in 2014, our analysis indicates that global awarded acreage is likely to fall below 2015 levels this year, while staying above the level seen in 2016. All will depend on global oil and gas companies’ budgets and their appetite to take on new risk and exploration commitments in the current market environment," Rystad said. 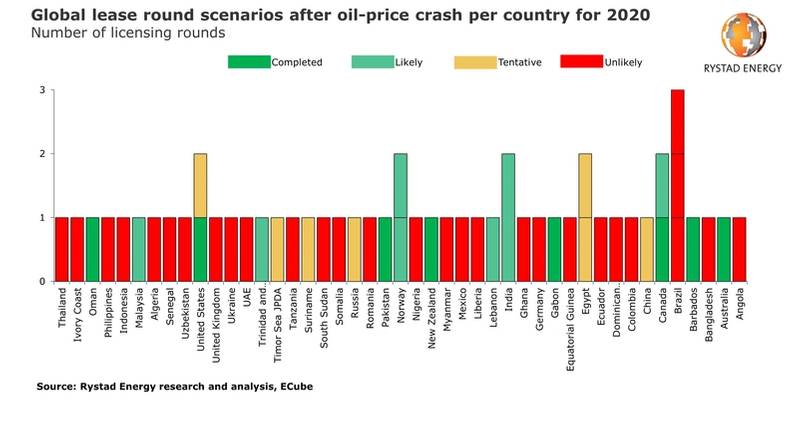