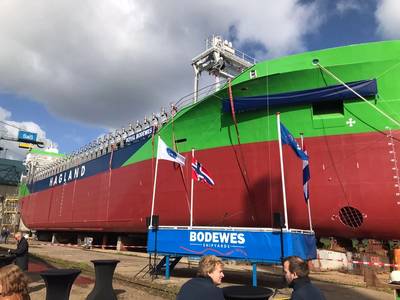 EST-Floattech has been contracted by Hoogendijk Electric to design and deliver the complete battery system for Hagland Pioneer, the third newbuild hybrid coaster for Norwegian shipping company Hagland, currently being built at Royal Bodewes shipyard and due for delivery halfway 2023.

EST-Floattech’s battery system enables the 5,000-DWT self-discharging bulk carrier to make zero-emission port calls. The vessel, one of a series of three, will also sail in full-electric mode, for example in environmentally sensitive environments, such as in fjords or near-coastal communities. When there is no shore connection available the battery system also allows for zero-emission discharging of the transported bulk cargo.

During long distance transits, the system allows for peak shaving via the electric motor and generator (aka the PTI/PTO). The batteries can be charged during transit or in harbor via the shore connection.

For this project, EST-Floattech deployed its DNV-certified Green Orca battery system. The system, including battery management software and control units for enhanced safety was optimized for the ship’s operational profile in close cooperation with system integrator Hoogendijk Electric.

The newbuild will not only sail in zero-emission mode in port, it will also reduce noise and emissions during sailing. According to Hagland its new coasters will reduce CO2 emissions by 40% and NOx emissions by about 90%, compared to older vessels in their fleet, which will be replaced. With EST-Floattech’s battery-hybrid system the ship complies with IMO TIER III requirements. 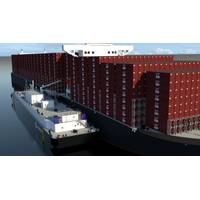 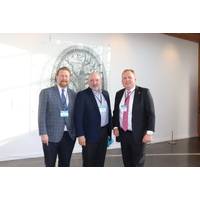