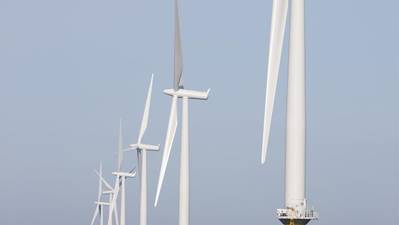 New Energy Investment, indirectly owned by investment bank Goldman Sachs, is selling a 1.78 percent stake in Danish utility and offshore wind farm developer Dong Energy.
Goldman Sachs said on Wednesday it had launched the sale of the 7.5 million shares to institutional investors in a so-called accelerated bookbuild offering.
Goldman Sachs, Nordea and Danske Bank are acting as joint global bookrunners for the offering.
State-controlled Dong Energy became one of the biggest IPOs of last year when a group of investors including the Danish state, Goldman Sachs and Danish pension funds sold shares on the Copenhagen stock exchange.