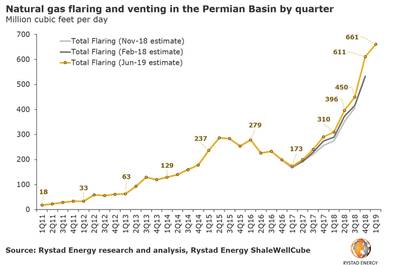 As spot prices in the region have remained near or below zero, natural gas flaring and venting in the Permian Basin in Texas and New Mexico reached a new all-time high in the first quarter of 2019, averaging as much as 661 million cubic feet per day (MMcfd).

According to research conducted by Rystad Energy,  this widespread waste of a valuable commodity is the result of persistent infrastructure challenges, a lack of sufficient takeaway capacity and an unexpected outage on a key pipeline in the area.

“We anticipate that basin-wide flaring will stay above 650 MMcfd before the Gulf Coast Express pipeline comes online in the second half of 2019,” says Artem Abramov, Head of Shale Research at Rystad Energy.

To put these volumes into perspective, the most productive gas facility in the US Gulf of Mexico – Shell’s Mars-Ursa complex – currently produces about 260 to 270 MMcfd of gross gas, which is only some 40% of the amount of gas flared and vented every day in the Permian.

This estimate is based on Rystad Energy’s latest research on lease-level gas disposition reporting, based on data from the Texas Railroad Commission and New Mexico Oil Conservation Division.

Raw data from state agencies experiences significant reporting delays (particularly on the Texas side of the basin), and Rystad Energy has therefore developed a model to provide the best possible estimate for flared and vented gas volumes that have not yet been reported.

Gas flaring and venting in the US is currently concentrated within two basins: the Permian and the Bakken. Levels in the Bakken, located in North Dakota, were around 500 MMcfd in the first quarter of 2019, which brings the collective volumes of flared and vented gas from these two basins up to about 1.15 Bcfd.

Converting to the metric system for comparative purposes, that represents 12 billion cubic meters of wasted gas per year, which exceeds the yearly gas demand of nations such as Israel, Colombia and Romania.

The largest operators in the Permian Basin flared on average 5.1% of operated gross gas production in the fourth quarter of 2018 and the first quarter of 2019.

Regulations stipulate that operators must report both flaring and venting as a lump sum. Venting is gas release without combustion, whereas flaring is the burning of excess capacity.