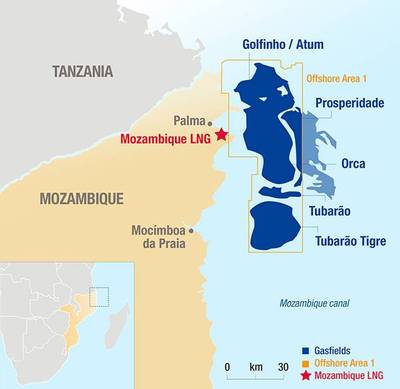 Mozambican troops battled Islamist insurgents in a town in a northern town on Monday close to billion-dollar gas projects being developed by ExxonMobil and Total, police said.

Mocimboa da Praia is about 350 km (220 miles) by road from the city of Pemba in Mozambique's northernmost province of Cabo Delgado and is just south of the Afungi peninsula, where gas projects worth $60 billion are located.

The town is strategically important to the projects. Until recently it was the main airport for workers traveling to the site, before a landing strip was built at Afungi itself, and its port is also used for some cargo deliveries for the projects.

The army was doing all it could to restore security, he said warning people to stay away.

Security analysts said parts of the town, including the army barracks, were reportedly occupied by the attackers.

The insurgents started staging attacks in Cabo Delgado in 2017, threatening security in a nation set to become a global gas exporter following one of the biggest gas finds in a decade offshore Cabo Delgado.

Little is known about the insurgents, though initial attacks were claimed by a group known as Ahlu Sunnah Wa-Jama. More recently, Islamic State has claimed a number of attacks.

More than 900 people have been reported killed in the province since 2017, according to the Armed Conflict Location and Event Data project, an NGO.

The frequency of attacks has been increasing, leaving some analysts concerned that the insurgency could be a growing threat and that it could cause disrupt the gas boom.

While Raymakers said the LNG infrastructure and personnel will remain "aspirational targets" for now, the insurgents will likely be emboldened by their successes and seek to increase the tempo of their operations.

Total said it was aware of the developing situation in Mocimboa do Praia, but the Afungi site remained secure and all of the members of its team accounted for.

Both Exxon and Total said the safety of their employees was a priority and they were monitoring developments and working with the relevant authorities on security.

Reuters reported in January that the oil companies had requested more government troops be bought in to protect the site amid a rise in the number of attacks.

(Reporting by Manuel Mucari in Maputo and Emma Rumney in Johannesburg; Writing by Emma Rumney; Editing by Angus MacSwan)