erje Solsvik and Nerijus Adomaitis May 18, 2020 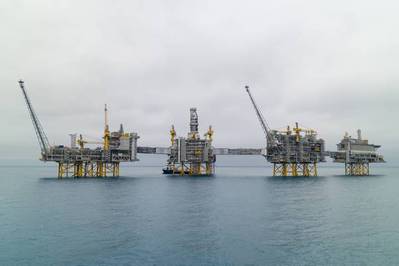 Lundin Energy has cut its 2020 oil and gas output target after Norway's decision to reduce production along with OPEC+ producers, the Swedish company said on Monday.

The company has a 20% stake in the Equinor-operated Johan Sverdrup field, which reached phase-one plateau output of 470,000 barrels of oil equivalent per day (boepd) in April. It also operates the Edvard Grieg oilfield.

Lundin is now targeting daily volumes of 157,000 boepd day this year, down from a previous 160,000-170,000, owing to production restrictions imposed by the government after OPEC+ agreed to cut supplies in an effort to support prices.

Analysts, however, said the cuts in reality would be smaller because of an inflated baseline, the ramping up of operations at the Sverdrup field and summer maintenance that would have reduced production in any case.

Production capacity at Sverdrup's offshore installations was increased to 470,000 bpd from its orriginal installed capacity of 440,000 bpd, Equinor said on March 30.

The Edvard Grieg field will be shut for maintenance in the third quarter rather than deferring the work to next year, the company said.

The new 2020 guidance is within the range of the Lundin's original guidance for the year of 145,000-165,000 boepd, which had been revised upwards shortly before the government announced its cuts.

Analysts at Sparebank 1 Markets reduced Lundin's earnings-per-share outlook for 2020 by 8% after the revised guidance but said they see more upside potential than downside risk for 2021-22 production.

Norway's Aker BP, which has an 11.6% stake in Sverdrup, has told Reuters it would keep its production guidance at 205,000-220,000 boepd despite the government-imposed production cuts.

Equinor has suspended its production guidance for 2020 and expects to provide a revised outlook when it reports second-quarter results in July.