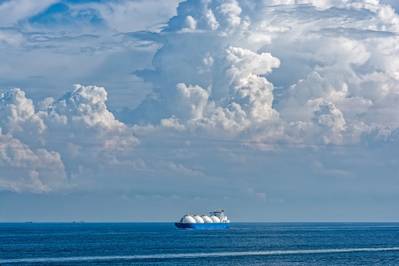 The White House and China on Saturday said a U.S. trade team would travel to China to explore new energy and agricultural deals. The joint communique lowered trade tensions, lifting stock markets in Asia and the United States on Monday.

There are over two dozen proposed U.S. LNG plants waiting for customer commitments to reach a final investment decision, many of them looking to China for deals. About 13 percent of U.S. LNG cargos went to China last year, according to data provider Genscape. China imported 5.6 billion cubic feet per day last year, making it the world's largest buyer after Japan.

"We see it as a positive development," said William Daughdrill, director of health, safety and environmental at Delfin Midstream. Its chief executive was in Asia last week pursuing customers, Daughdrill said.

Delfin is proposing a floating LNG facility in the U.S. Gulf of Mexico and aiming for a final investment decision as early as this year to go ahead and produce up to 13 million metric tons per annum (mtpa) of LNG for export.

"For us, it's strictly been about marketing to China," said Greg Vesey, chief executive of LNG Ltd, which is developing an LNG plant in Louisiana and another in Nova Scotia in Canada. It hopes to reach a final investment decision on the U.S. project by year-end and begin exports in 2022, he said.

"If you look at some forecasts for 2035, there are really only two places that have significant increases in LNG imports. Europe goes up about 100 mtpa and China goes up about 200 mtpa," Vesey said.

Texas LNG, which is proposing a 4-mtpa export facility in Brownsville, Texas, and has five early-stage agreements with Chinese customers, hopes to make a final decision next year, about six months behind its original goal.

"Sentiment in the LNG markets is heating up again," said Langtry Meyer, co-founder of the company. Texas LNG is not considering developing an import terminal in China, he said, which would likely be needed to expand U.S. exports.

Cheniere Energy Inc this month said it would soon make a final investment decision on a third liquefaction line at its Corpus Christi, Texas, facility. A spokesman on Monday declined further comment on its decision.