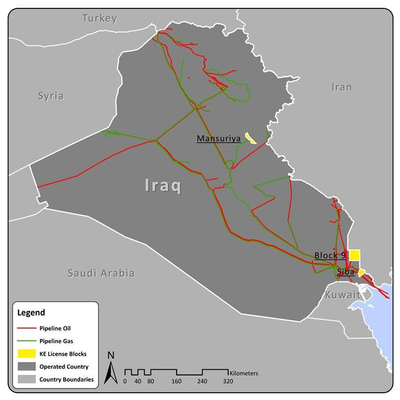 Kuwait Energy PLC <IPO-KEC.L> started producing natural gas from Siba on Wednesday, the first gas field to be brought on stream in the south of Iraq, an Iraqi oil executive told Reuters.

Siba began producing gas at an initial rate of 25 million cubic feet a day (mcf/d), which should rise gradually to 100 mcf/d by the end of the year, said Kareem Abd Oda, the director general of the joint venture established by Iraq and Kuwait Energy to develop the field.

Siba, south of the city of Basra, is producing natural gas and gas condensates, he added.

The other hydrocarbon reservoirs of southern Iraq that are already in operation produce natural gas alongside crude oil.

The gas extracted in several of these fields is burnt off instead of being captured, as the country lacks the capacity to process it into fuel for local consumption or exports.

Iraq hopes by 2021 to end gas flaring, which costs nearly $2.5 billion in lost revenue for the government and would be sufficient to meet most of its unmet needs for gas-based power generation, according to the World Bank.

Iraq holds on Thursday an auction of oil and gas exploration contracts in 11 blocks alongside the border with Iran and Kuwait and in offshore Gulf waters. The new contracts set a time limit for companies to end gas flaring from oilfields they develop.

Iraq is the Organization of the Petroleum Exporting Countries' second-largest producer after Saudi Arabia.

Iraq's crude exports from its southern region on the Gulf have averaged 3.5 million bpd so far in April, two oil executives told Reuters on Wednesday.

That is higher than the March average of 3.45 million bpd.