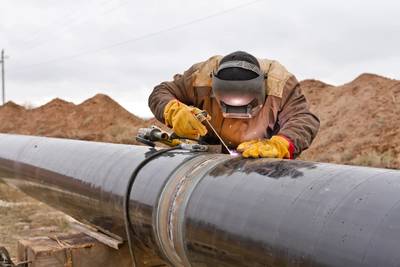 The precise source of a leak on TC Energy Corp's Keystone oil pipeline in North Dakota has not yet been identified, a spokesman for the U.S. Pipeline and Hazardous Materials Safety Administration (PHMSA) said on Monday.

Clean-up crews in Walsh County, North Dakota, have been working to plug the Keystone pipeline after a more-than 9,000-barrel oil leak last week.

Work continues to progress at the site with about 200 personnel focused on clean-up and remediation activities, TC Energy spokesman Terry Cunha said by email on Monday.

The 590,000-barrel-per-day Keystone system is an important artery for Canadian heavy crude, imported by the United States for blending with other oils to be refined into gasoline, diesel and other fuels.

Western Canada Select (WCS) heavy blend crude for December delivery in Hardisty, Alberta, was trading at more than $22 per barrel below WTI on Monday, according to traders and Net Energy Exchange, the highest in nearly a year.

There was no planned maintenance work scheduled on the Keystone line at the time of the leak, according to the PHMSA spokesman.

It was not immediately clear whether a corrective action order would be issued by the PHMSA.

To date, about 4,300 barrels of oil have been recovered, Cunha said, adding that preliminary work to expose and remove the damaged section of pipe has begun and is expected to be complete by the end of the week.

The pipe will be sent to a third-party laboratory, approved by the PHMSA, for a full investigation, he said.

Last week, TC Energy said it was conducting a full investigation into the cause of the release and its focus was on containment, clean-up and safety of the public as well as the environment.

Flows on the 750,000 bpd Marketlink crude pipeline, which connects to the Keystone system, were still disrupted on Monday, with rates last seen averaging about 650,000 bpd, traders said.