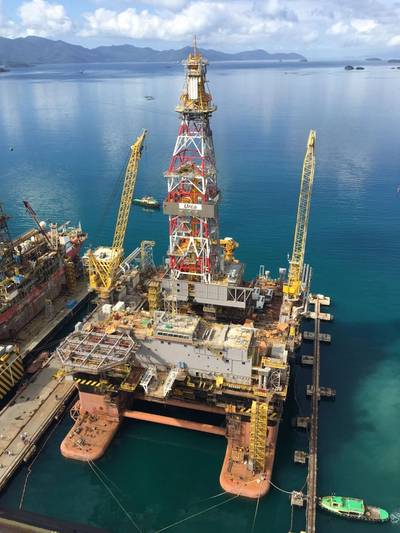 When the Settlement Agreement is completed, Keppel O&M will have full ownership over the four uncompleted rigs to explore various options to extract the best value from the assets. Keppel O&M is also in discussions with Magni Partners on the terms to complete the construction of the drilling rigs Urca (pictured) and Frade, which are about 92% and 70% completed respectively. (Photo: Keppel)

Keppel and Sembcorp Marine are among a host of firms caught up in the wide-ranging "Car Wash" investigation. In late 2017, Keppel's rig-building unit paid $422 million to resolve charges it paid bribes to secure contracts in Brazil, including with Sete.

Keppel has previously booked provisions of about $311 million ($225 million) related to the contracts to build six drilling rigs for Sete and had halted construction in late 2015.

On Monday, Keppel said it will take ownership of four uncompleted rigs via a subsidiary, and hopes to receive compensation under Sete's court-ordered restructuring for a further two rigs.

Separately, Sembcorp Marine said it had reached a deal over its previous contracts with Sete for seven drillships, worth $5.6 billion.

It said it will "keep all works performed" for five ships, and split ownership with Sete for a further two ships.

Sembcorp Marine said it will terminate arbitration against Sete following the settlement, and that the event is not expected to have a material impact on its 2019 earnings.

Brazilian authorities searched Sembcorp's shipyard in Brazil in July, underscoring the staying power of the wide-ranging graft investigation that began in 2014.

As one of the largest corporate corruption probes in history, Car Wash has already taken down scores of politicians and businessmen in Brazil and across Latin America who were once thought untouchable.