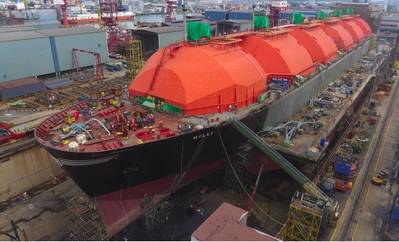 Gimi MS will build and operate the facility, said the company.

Keppel and Golar have previously partnered on the FLNG Hilli Episeyo, the world's first FLNG conversion project, which has been a successful proof of concept as a quick and cost-efficient solution for monetising stranded gas reserves.

"We are pleased to further strengthen Keppel's relationship with Golar in capturing growing opportunities in the LNG space. This transaction reflects Keppel's confidence in the prospects of the FLNG sector and that this investment will provide attractive risk-adjusted returns," said Loh Chin Hua, CEO of Keppel Corporation.

He added: "Our investment is in line with Keppel's business model and harnesses the diverse capabilities of the Group. We are pleased that Keppel Offshore & Marine has been chosen to execute this important project, which will further strengthen our capabilities and track record in the conversion of FLNG vessels."

"The Gimi investment can also be a seed asset for a possible infrastructure fund managed by Keppel Capital in the future. After the asset has been completed and de-risked, the 30% interest may be injected into Keppel Infrastructure Trust," Chin Hua concluded.

Golar's CEO Mr Iain Ross said, "Golar is pleased to be working with Keppel again on its second FLNG project. Testament to the quality and reliability of the floating LNG solution, Golar has entered into a 20-year Lease and Operate Agreement with BP for the charter of FLNG unit, Gimi, to service the Greater Tortue Ahmeyim project. The safe and reliable performance of FLNG Hilli Episeyo is in part due to the high quality and safe workmanship of Keppel Offshore & Marine and we look forward to these same high standards being maintained throughout the construction of FLNG Gimi."

With the funds from the subscription of shares by its shareholders, Gimi MS will acquire and own the Moss LNG carrier Gimi which will be converted into an FLNG vessel by Keppel Shipyard. In December 2018, Keppel Shipyard received the limited notice to proceed from Golar to commence early conversion works. The carrier has been relocated from layup to Keppel Shipyard in Singapore where conversion works will soon start.

On completion of the subscription, FFH will enter into a shareholders' deed with Golar and Gimi MS. Under the terms of the shareholders' deed, Gimi MS may issue cash calls on a pro rata basis to the shareholders, namely FFH and Golar, for future funding requirements for the construction, deployment and commissioning of Gimi based on an anticipated project budget limit of approximately $1.3 billion exclusive of financing costs.

FFH is committed to invest up to an estimated maximum total of $250 million in connection with the Project inclusive of the subscription price.