By Ahmad Ghaddar, Julia Payne and Dmitry Zhdannikov May 11, 2018 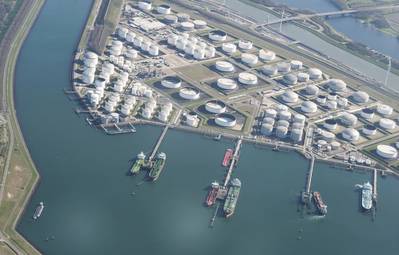 European oil companies are not ruling out reducing Iranian oil imports after the threat of new U.S. sanctions, with some expecting banking issues to hinder trade, but there was no rush to immediately cut volumes.

U.S. President Donald Trump said on Tuesday the United States was exiting an international nuclear deal with Iran and would impose new sanctions that seek to reduce oil exports from OPEC's third-largest producer.

But as of Friday, companies in Europe said they were still taking Iranian oil. Iran pumps about 4 percent of the world's oil and exports about 450,000 barrels per day (bpd) of crude to Europe, according to tanker-tracking data.

"At this moment, our trading activity is business as usual," said Marta Llorente, a spokeswoman for Spanish oil company Cepsa, one of Iran's customers in Europe.

"We strictly conform with European Union and international laws and regulations, and scrupulously respect any trade restriction that could occur from any potential international sanctions or embargo."

Another European buyer, Italy's Eni, said it is buying 2 million barrels a month of Iranian crude as part of a contract running to year-end, adding any new sanctions would take six months to kick in.

The U.S. sanctions have a 180-day period during which buyers should "wind down" oil purchases, meaning any loss of supply will not be immediately felt - and companies don't have to rush to find alternatives.

But Greece's biggest oil refiner Hellenic, which was the first European European company to agree to buy crude oil from the National Iranian Oil Company (NIOC) after sanctions on Iran were lifted in January 2016, rang a cautious note:

"We are closely monitoring developments following (the) U.S. administration decision ... and will assess our position and commercial arrangements accordingly," Hellenic said.

"In any case we will make sure that we comply with the applicable international regulatory framework and, given our crude supply flexibility and diversification, we do not expect any significant effect on our operations."

The bulk of Iran's crude exports, about 1.8 million bpd, go to Asia.

A decline in volumes due to the sanctions will add to upward pressure on oil prices, which have gained this year because of an OPEC-led supply cutting deal and strong global demand. Crude has topped $78 a barrel, the highest since 2014, following Trump's sanctions announcement.

Market participants said there were still many unanswered questions about how the United States might impact European companies.

"We're doing nothing," said the head of trading at another European refiner. "It's wait and see. If we're forced to reduce, we will. Iranian is not the only crude."

Banking Issues
Sources at global trading companies predicted an imminent drop in Iranian exports due to banking issues, such as availability of trade finance.

A source at a trading company buying Iranian oil said it hoped to keep buying at least during the six-month "wind down" period before new sanctions take effect, but expected banking issues to put a stop to trade.

"It looks like you can still go on for six months," the source, who declined to be identified, said. "The key is banks. If banks stop us, we might stop."

A senior trader with another company said he expected banking to pose a major problem to Iranian oil trade and a third said even if waivers are granted, volumes would still decline.

"Waivers seem a sensible course of action," the third source said, referring to potential exemptions from the latest U.S. sanctions.

"But you need to reduce your volume take over the grace period of 180 days to be favourably treated in the waiver discussion. You can't just stay at current levels until then and get a waiver."