Iran Floats Surplus Oil as Demand Falls Ahead of US Sanctions 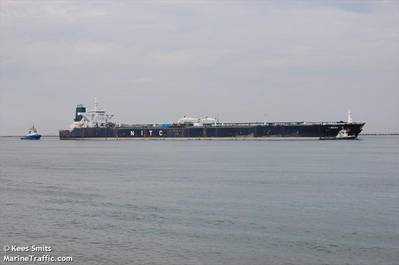 Two tankers carrying Iranian condensate, a type of ultra-light oil, have been floating off the United Arab Emirates for about a month as demand for the oil fell ahead of U.S. sanctions.

The tankers, carrying about 2.4 million barrels of South Pars condensate combined, have been floating off the UAE since August after South Korea halted imports from Iran while China's demand dropped during summer, according to several industry sources and shipping data.

The build-up in Iranian oil supplies underscores the pressure that Iran is facing as Washington aims to bring Iranian oil exports down to zero to force Tehran to re-negotiate a nuclear deal.

The Very Large Crude Carrier (VLCC) Felicity loaded condensate at Iran's Assaluyeh port in early August and then set ail for Jebel Ali in the UAE, shipping and trade flows data on Thomson Reuters Eikon showed. It arrived at the ship-to-ship transfer area off Dubai on Aug. 7 and has been anchored there since.

Similarly, the Suezmax tanker Salina also loaded oil at Assaluyeh and has been circling in the same area off Dubai since Aug. 17, according to the data.

China typically cuts South Pars condensate imports sharply during the summer months between the second and third quarter because of its foul smell, the sources said. The condensate contains high levels of a sulphurous compound known as mercaptans that require additional processing by refiners to remove.

"Taking a cargo to China now when China may not want its arrival dates means it may lose a cargo to India," a U.S.-based trader said. "So the cargoes will stay in place until they need to leave on agreed delivery period."

Emirates National Oil Company (ENOC), another buyer of Iranian condensate, has been asked by the UAE government replace Iranian supply with imports from other countries, one of the sources said.

The UAE authorities are cracking down on oil and financial activities linked to Iran before the sanctions take effect.

The National Iranian Oil Co and ENOC did not respond to requests for comment.

The number of ships loaded with Iranian oil and anchored off the loading port of Kharg Island and the Souroush oil field has also risen as Iran's pool of buyers shrank, the data showed. Three supertankers capable of carrying 2 million barrels, the Happiness I, MT Hedy and Humanity, have floated for 10 days or more while another four have been there for less than a week.

Iran's August crude and condensate exports fell to 67.7 million barrels, the lowest since April 2017, according to data from Thomson Reuters Oil Research and Forecast.