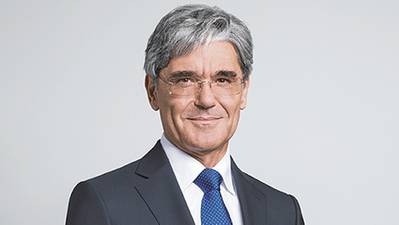 Siemens Chief Executive Joe Kaeser has signaled he wants to renew his contract when it runs out in 2018, a move welcomed by investors who have grown to trust the 59-year-old company veteran.
Kaeser ousted his predecessor Peter Loescher in a boardroom coup in July 2013 when he was finance chief. Since then he has streamlined the German group to focus on its strengths in industrial engineering, raised profitability and seen the share price respond this year.
There is still work to be done but investors believe Kaeser deserves a new contract.
The trains-to-turbines group trails rivals with its enterprise value of 9.7 times estimated 2016 core profit, below multiples of 17.3 for General Electric, 10.5 for ABB and 10.4 for Schneider Electric (SND.HA).
But after a clean-up of underperforming businesses, almost 1 billion euros ($1.1 billion) in cost cuts and the sale of Siemens (SIEMENS.NS)' last consumer operations, investors see the group as well placed to take advantage of opportunities in its markets.
"We are happy with his work. The first successes of his revamp are visible. Profitability is rising and we're not at the end yet by a long way. We see a lot of upside," said portfolio manager Christoph Niesel of Union Investment, a top 20 investor.
Kaeser is expected to oversee a spin-off of Siemens' healthcare unit, valued at about 20 billion euros, within the next year or two after Kaeser separated it legally and operationally from the rest of the group.
Winning Over Critics
German business daily Handelsblatt wrote on Sunday that Kaeser had signaled to Siemens' supervisory board he would be happy to continue beyond 2018, citing company sources.
The report came two days after long-serving and respected Chief Technology Officer Siegfried Russwurm said he would not extend his contract beyond next March, by "mutual agreement" with the supervisory board.
Russwurm was regarded as a potential alternative chief executive.
A Siemens spokesman declined to comment on the Handelsblatt report and a supervisory board member said the issue had not been discussed.
Kaeser's popularity is perhaps higher than at any time since he took over.
As recently as January's annual meeting, shareholders were bitterly complaining about Siemens' lagging share price, the dangers of ambitious new projects such as a deal to build energy infrastructure in Egypt, and the ill-timed acquisition of U.S. oilfield equipment Dresser-Rand -- at $7.8 billion, Siemens' biggest-ever takeover.
Since then, the share price has risen by one-sixth, outperforming the German blue-chip DAX by 8 percent, while the oil price has jumped by almost half, improving prospects for the Dresser-Rand business.
The Egyptian project, Siemens' biggest-ever contract, is on track so far, unlike other large Siemens projects in the past, which often ran into problems that regularly caused hundreds of millions of euros in unexpected charges.
"Siemens executes the big projects much better than in the past," said another top 10 Siemens shareholder, who asked not to be named because he is not authorised to speak to the media.
Ruthless Streak
Kaeser -- a sharp dresser who shaved off his trademark moustache upon becoming CEO and is at ease with the financial community thanks to his seven years as CFO -- has also endeared himself to investors with a 3 billion-euro share buyback scheme over three years.
Operating profitability at Siemens' industrial businesses rose to 10.8 percent last quarter from 6.5 percent before Kaeser took over, and disposals of units including hearing-aids and home appliances brought welcome gains.
At the same time, Kaeser has beefed up Siemens' engineering simulation software with large acquisitions including CD-adapco of the United States this year, making it the only industrial automation player globally with integrated software.
Kaeser's fortunes could change again rapidly, though: In recent media interviews he has said he is "very cautious" about geopolitical uncertainty clouding the investment climate for 2017.
Investors also point to his ruthless nature, which helped him to get the job, as a potential weakness.
"The one point where he has to be a bit careful is to make sure he has the backing of other top management. We've seen Russwurm and other managers leaving," said the top 10 investor.
Others were concerned that Kaeser could be drawing his power from too narrow a base.
Union Investment's Niesel said: "Russwurm is one of the names you'd think of when considering who would lead the company. Everything is now tailor-made for Mr Kaeser and his team. But that's an issue for Siemens management."
($1 = 0.8877 euros)
(Reporting by Georgina Prodhan; Editing by Keith Weir)
Email