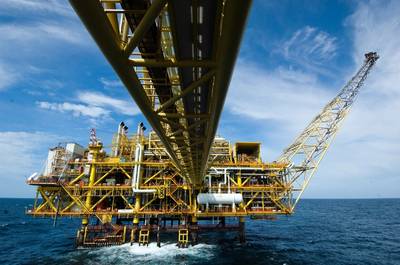 The company projects higher margins will drive compound annual cash flow growth of 20 percent through 2025, it said ahead of a meeting with Wall Street investors.

The company shrugged off a recent dip in oil prices and said it was moving from growth and investment mode to one where all of its major assets will start producing free cash flow. “We are at a transformative inflection point,” Chief Executive John Hess said during the investor meeting, broadcast over the internet.

Hess expects the first production from the offshore Guyana discovery to be tapped in 2020, and said the region had the potential to produce more than 750,000 barrels of oil equivalent per day by 2025. Hess is working with Exxon Mobil Corp on fields projected to hold up to 5 billion barrels of recoverable oil and gas.

The New York-based company earlier this week set a 2019 capital budget of $2.9 billion, up 38 percent from this year's projected spending plan. The budget reflects "peak" spending for the first phase of offshore Guyana oil discoveries.

Hess stock was down a fraction at $51.96 a share in afternoon trading on Wednesday. The stock is up about 12 percent year to date.