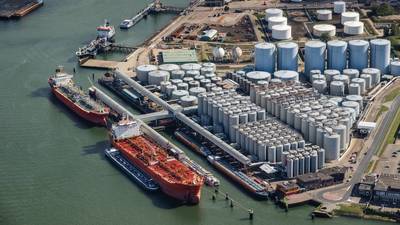 On August 18, 1990, the Oil Pollution Act of 1990 (OPA 90) was enacted into law.  Section 4202 of that Act amended the Federal Water Pollution Control Act (FWPCA or Clean Water Act) to require tank vessels and marine transportation-related facilities to prepare and submit to the US Coast Guard plans for responding, to the maximum extent practicable, to a worse case discharge, and to a substantial threat of such a discharge, of oil or a hazardous substance carried in bulk as cargo.

While oil and oil products are transported by numerous marine carriers and facilities (a few of which require close supervision), HazSubs are transported by a lesser number of marine carriers and facilities, the vast majority of which are highly professional.  Thus, HazSub spills are few in number and generally of small quantity.  That does not mean that HazSub spills never occur.

On February 28, 2004, the chemical carrier Bow Mariner, sailing approximately 45 nautical miles off the Virginia coast, caught fire and exploded while the crew was engaged in cleaning residual methyl tert butyl ether (MTBE) from cargo tank number eight starboard.  The tank vessel sank about 90 minutes later.  Of the crew of 27, only eight survived.  The cargo of over three million gallons of ethyl alcohol was released, along with the vessel’s fuel oil.  From an environmental viewpoint, ethyl alcohol is not a designated HazSub and dissipates rapidly in water.  Almost all chemical carriers, though, are frequently engaged in the carriage of HazSub and significant volumes of HazSubs are transported through US ports.

Other chemical tanker accidents have been documented.  On 17 December 1985, a chemical tanker was loading benzene at a chemical facility in Kurashiki, Japan.  A Teflon ring had been inserted between a guide pipe and a float of a level gauge of the tanker to prevent noise.  The Teflon ring insulated the float against the hull and an electrical charge accumulated.  A spark was generated, igniting benzene vapor in the headspace of the hatch, resulting in an explosion and fire on the vessel, which spread to the pier.  The tanker was towed away from the pier.  Fires on both the tanker and the pier were extinguished.  The tanker suffered extensive damage.  On 9 January 2011, the small chemical tanker Seiyo capsized and sank off Sado Island, Japan, spilling approximately 1,000 tons of vinyl acetate monomer.  The chief engineer died in the casualty and the master went missing and is presumed dead.  On 8 January 2019, the chemical tanker Aulac Fortune suffered an explosion and fire off Lamma Island, Hong Kong, apparently due to the accumulation of flammable gas in a cargo tank.  The explosion could be heard up to 20 km away.  Of the 25 crew members, one died, and another went missing and is presumed dead.

The lesson to be learned is that marine transportation casualties involving chemical tankers are few in number, but have the potential for high consequences.

The chemical transportation sector has undertaken a variety of measures to minimize the risk of marine transportation casualties.  The US Congress, though, was of the opinion that more needed to be done, particularly with regard to coordination between that industry and federal agencies such as the US Coast Guard and the Environmental Protection Agency (EPA).  Those agencies have reached the conclusion that the industry efforts are satisfactory.

On 25 June 2018, the EPA issued a notice proposing no new HazSub spill prevention and response requirements under OPA 90.  On 8 February 2019, the US Coast Guard issued notices withdrawing its previously proposed rulemakings for HazSub spill response plans for tank vessels and marine transportation-related facilities.  The Coast Guard stated in those notices that the proposed rules are no longer appropriate due to the current state of spill response in the chemical industry.  The Coast Guard avers that it remains committed to fulfilling its OPA 90 mandate and intends to better analyze the current spill response capabilities of the chemical industry before conducting any further rulemaking in this area.
In my opinion, the EPA action is contrary to the Congressional mandate.  The failed Coast Guard rulemaking, on the other hand, constitutes a failure of imagination.  While the chemical industry is to be lauded for its safety record, there are certain measures, required by OPA 90, that appear to be missing.  The law requires the appointment of qualified individuals empowered to implement spill response plans and the sharing of those plans with the federal government.  The chemical carriers and facilities are required to have under contract spill response contractors (similar to OSROs) and salvage and marine firefighting (SMFF) resource providers so that response contracts do not have to be negotiated after a casualty occurs.  Regular drills and exercises are also required.

I recommend that the Coast Guard meet with the marine transportation chemical sector and determine which current industry measures can be considered as providing an equivalent level of safety to measures mandated in OPA 90.  The gaps identified can then be filled in a rulemaking.  This will meet the Congressional requirements while simultaneously improving safety, security, and protection of the marine environment.