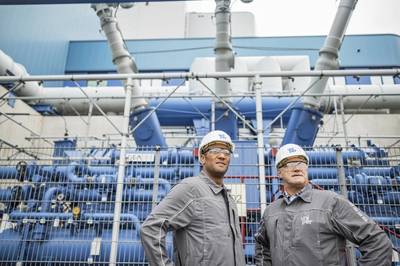 Germany confirmed the nationalization of struggling gas importer Uniper at a cost of 8 billion euros ($7.9 billion) on Wednesday as it scrambles to secure power for Europe's largest economy after Russia cut back supplies.

Nationalizing Germany's largest importer of Russian gas is the second move in a week by the government in Berlin to take control of an energy business as it confronts a winter crisis.

Uniper, whose shares were around 18.97% lower at 3.38 euros at 0710 GMT, burned through its cash buying alternative supplies after Moscow cut gas flows to Germany, triggering a 15 billion euro state rescue package in July.

But it became soon clear that bailout was not enough to cover Uniper's soaring losses and Germany will now inject another 8 billion euros, partly by buying out Finnish utility Fortum's holding for 1.70 euros per share.

After completing a capital increase and the Fortum share buy, which excludes the Finnish firm's subscription rights, Germany will hold 99% of Uniper, the economy ministry said.

"The state will - that's what we're showing now - do everything possible to always keep the companies stable on the market," German economy minister Robert Habeck told reporters.

Germany took control of a Russian-owned oil refinery which supplies 90% of the capital's fuel on Friday, putting a Rosneft ROSN.MM unit under the trusteeship of the industry regulator and taking over the Schwedt plant.

"We are investing in Uniper with 8 billion in equity and are effectively buying Fortum out. Let me say this once again: Fortum is losing its entire equity investment as a result," Habeck said.

Finland's government, which has a 50.76% holding in Fortum, said it would have to live with the deal.

Fortum said in March 2020 it had made investments worth 6.5 billion euros to give it a 69.6% stake in Uniper. It later raised its stake to 80%, which it held until the July dilution.

For years, Fortum has been a significant contributor to the Finnish state budget through dividends, and the soaring losses it has accrued via its German subsidiary has put the government under heavy public pressure.

In the second quarter alone, Fortum made a loss of 9.1 billion euros due to Uniper's losses in gas trading.