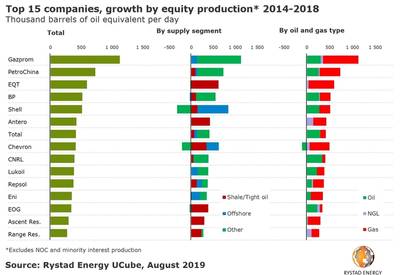 Russian giant Gazprom saw the most production growth among world’s exploration and production (E&P) companies during the five-year span from 2014 through 2018.

Onshore resources – whether conventional or unconventional – are a major driver of growth, it said.

“Gazprom, the clear leader in production growth, is the only company with a total growth of more than 1 million barrels of oil equivalent per day (boepd) over the last five years,” said Espen Erlingsen, Rystad’s head of upstream research. “The growth comes primarily from conventional assets, with gas being the key contributor to the spectacular development.”

Production growth is a key performance indicator for E&P companies. This metric is commonly used by upstream players to demonstrate to investors that their portfolios are poised for growth as opposed to stagnated production.

Runner-up to Gazprom is PetroChina, with a total growth of around 730,000 boepd, also driven by conventional onshore gas production as well as splashes of shale gas growth.

The third company to make the podium is shale-focused EQT, the largest producer of natural gas in the US, boasting equity production growth of close to 600,000 boepd, or 340% growth over the last five years.

Much of the production uptick can be credited with the company’s operations in the Middle East, with significant production additions from the Rumaila field in Iraq, and in North America, where shale and US deepwater are driving most of the changes.

Five of the majors – BP, Shell, Total, Chevron (CVX) and Eni – have made Rystad Energy’s list of the 15 fastest-growing E&P companies. Absent from the list are ExxonMobil and ConocoPhillips (COP).

Equity production is strong not only among the majors, but also among five companies that are primarily focused on US shale and tight oil: EQT, Antero, EOG, Ascent Resources and Range Resources.

All calculations have been made using each company’s equity, or working interest, across its upstream assets. National oil companies, defined as national companies with activities only in their home country, are excluded.