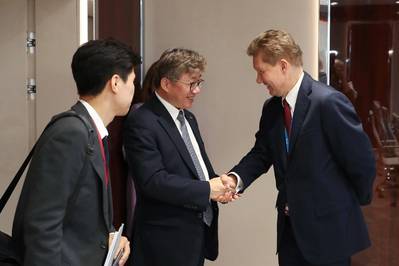 Russian oil and gas company Gazprom Neft (SIBN.ME) has announced that a working meeting has been held between Alexey Miller, Chairman of the Gazprom Management Committee, and Hee-Bong Chae, President and Chief Executive of KOGAS.

The meeting participants reviewed the state and prospects of cooperation between the companies, highlighting the stability of LNG supplies under the contract between Sakhalin Energy Investment Company Ltd. and KOGAS.

The parties expressed interest in further expanding their cooperation in the area of LNG and continuing their sci-tech collaboration.

KOGAS (Republic of Korea) is focused on the construction and operation of LNG receiving terminals and gas distribution networks, the implementation of international gas projects, and research and development in the gas industry.

In 2005, Sakhalin Energy Investment Company Ltd. (in which Gazprom owns 50 percent plus one share) and KOGAS signed the contract for the supply of 1.5 million tons of LNG per year from the Sakhalin II project. Sakhalin Energy is the operator of Sakhalin II.

In 2016, Gazprom and KOGAS inked an Agreement of Cooperation. The document envisages a broader cooperation in the field of LNG supplies. In addition, the Agreement outlines the key avenues of cooperation, including in research and development, energy saving, environmental protection, and the NGV sector.