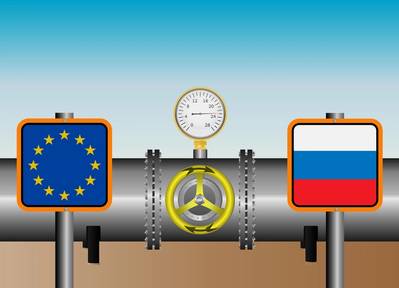 European gas prices soared more than 30% on Tuesday as low supplies from Russia reignited concerns about an energy crunch as the region heads for colder weather.

A key pipeline which normally delivers gas from Siberia to Europe continued to work in reverse on Tuesday, traders said, sending flows from Germany to Poland, while supplies of Russian gas from Ukraine to Slovakia were also subdued.

Russian energy exports have been in the spotlight amid the country's broader standoff with the West , including over its tensions with neighboring Ukraine, which is forging closer ties with NATO.

Gas flows via the Yamal-Europe pipeline, which usually sends Russian gas west into Europe, jumped on Tuesday in the eastwards direction, data from German network operator Gascade showed, with gas flowing from Germany to Poland for a 15th straight day.

Expectations for colder weather in Europe were contributing to upward pressure on prices, but the low Russian gas flows were the key driver, a trader said.

Europe has been at the center of an energy crisis since last year, when the lifting of COVID-19 restrictions put huge demands on depleted stocks of natural gas.

Benchmark prices have more than quintupled since January 2021, squeezing consumers and companies and threatening the economic recovery.

Some European Union lawmakers have accused Russia, which supplies more than 40% of the bloc's natural gas, of using the crisis as leverage.

They say Moscow has restricted gas flows to secure approval to start up the newly built Nord Stream 2 pipeline, which will supply gas to Germany.

Russia has denied the allegations, and says the pipeline will boost gas exports and help alleviate high prices in Europe. It has said it is meeting its contractual obligations on gas deliveries.

Russian energy giant Gazprom said on Sunday it had increased its overall gas exports, including to China, last year. However, it was likely to miss its target for supplies to Europe.

Russian President Vladimir Putin said last month that Germany was reselling Russian gas to Poland and Ukraine rather than relieving an overheated market, putting blame for the reversal of flows, and rocketing prices, on German gas importers.

The German government has declined to comment on the claim, while the country's gas importers have not responded to requests for comment.

Eastbound volumes via the Yamal-Europe pipeline hit almost 9.9 million kilowatt hours (kWh/h) at the Mallnow metering point on the German-Polish border on Tuesday morning, the data showed, up from 5.8 million kWh/h previously.

Auction results showed that Gazprom has not booked gas transit capacity for Tuesday for export via the pipeline, which accounts for about one sixth of Russia's normal annual gas exports to Europe and Turkey.

The company has also cut its daily volume of gas transit via Ukraine to Europe to about 50 million cubic metres (mcm), the lowest level since January 2020, the head of the Ukrainian gas transmission system's operator said on Tuesday.

Westbound flows via Yamal-Europe are expected to restart this month, after Gazprom at an auction last month booked 8.3 million kWh/h of transit capacity for January.

Capacity nominations for Russian gas flows from Ukraine to Slovakia via the Velke Kapusany border point, another major route for Russian gas to Europe, remained lower on Tuesday.

(Reuters reporting by Vladimir Soldatkin in Moscow, Nora Buli in Oslo and Jason Hovet in Prague; Editing by Louise Heavens and Jan Harvey)