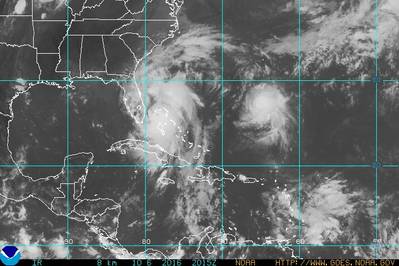 The Southeast United States is expected to be hit with fuel shortages in the aftermath of Hurricane Matthew, as the storm barrels toward one of the largest energy-consuming regions in the country.

Some states are already experiencing supply constraints as motorists fill up tanks as an emergency precaution. The region is not known for energy production, but there are significant storage facilities directly in the path of the storm that have already been evacuated.
Roads in Florida, Georgia, North Carolina and South Carolina were jammed on Thursday, while gas stations and food stores ran out of supplies as the Category 4 hurricane, which could be the deadliest storm in decades, approached.
The hurricane strengthened as it headed toward the Southeastern United States on Thursday after killing at least 140 people, mostly in Haiti, on its northward march.
About 10 million barrels of refined products storage lie in the path of the storm, and these storage facilities could suffer "significant damage," said Ernie Barsamian, CEO of the Tank Tiger, a storage consultancy.
Vitol's storage subsidiary VTTI said its Seaport Canaveral Florida storage terminal, located in Cape Canaveral, was evacuated and would remain shut until it is safe to restart.
The VTTI terminal has a capacity of 3 million barrels, and stores gasoline, diesel, jet fuel and kerosene, among other products.
Other facilities threatened include those in Jacksonville, Florida; Savannah, Georgia, and Charleston, South Carolina. If they sustain damage, gasoline would need to be trucked from other markets, up to 12 hours away, Barsamian said.
Retail gasoline prices in Florida, Georgia, North Carolina and South Carolina edged up slightly on Thursday, according to motorist advocacy group AAA. Prices in Florida climbed to an average of $2.185 per gallon from $2.165 on Wednesday.
But panic buying could lead to fuel shortages and higher pump prices, analysts said, as consumers anticipate power outages that could affect gas stations.
All major ports in the Florida region are shut. The state does not have any crude oil refineries and relies on products delivered by tanker and barge to Florida marine terminals.
If Florida, North Carolina, South Carolina and Georgia are hard hit by the storm, some stations could face challenges in getting fuel to motorists, said Patrick DeHaan, petroleum analyst at Gasbuddy.
Other than Florida, those states are still reeling from Colonial Pipeline Co's biggest gasoline spill in nearly two decades, which was discovered in Alabama last month. The outage in the pipeline, which connects the refining hub on the Gulf Coast to the East Coast, squeezed supplies and led to higher prices in the Southeast.
Colonial, which runs inland, said it did not anticipate any power disruptions based on the hurricane's current trajectory and is monitoring the situation.
The Georgia Ports Authority said on Thursday it would close operations ahead of the hurricane and that vessel activity is expected to resume on Sunday.
Some terminals in the Caribbean, including BORCO terminal and Statoil (STO)'s South Riding Point terminal, both in the Bahamas, have been shut since Tuesday.
On the U.S. East Coast, the effect of the hurricane is expected to be mixed. Matt Smith, director of commodity research at energy data provider ClipperData, said the storm's trajectory could result in cargoes being redirected to fill the supply loss in the U.S. Southeast after the storm.
U.S. gasoline futures have been choppy in the last two sessions, as traders say the hurricane will soften demand.
While the effect on futures prices from the hurricane is expected to be limited, cash prices in some markets, already affected by refinery maintenance season, could strengthen.
(Reporting by Devika Krishna Kumar; Additional reporting by Jessica Resnick-Ault and Jarrett Renshaw, Liz Hampton, Zachary Fagenson and Scott Malone; Editing by Matthew Lewis)
Email