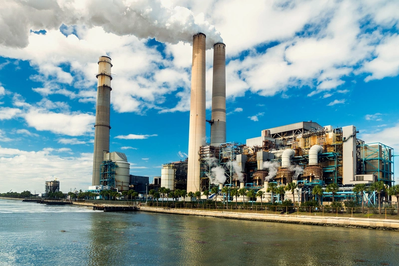 French energy group Engie is considering selling its power plant assets in Germany in a deal that could fetch a few hundred million euros, two people familiar with the process told Reuters.
Engie owns or holds stakes in three hard coal-fired power plants in Germany. It is the sole owner of the 472 megawatt (MW) Zolling site near Munich and the 351 MW Farge plant, and has a 52 percent stake in the 731 MW site in Wilhelmshaven.
One of the people said Engie had hired JP Morgan to advise on selling the assets, which could also include its local retail business. The source said the sale could also cover Engie's 800 MW Centrale Rotterdam plant in the Netherlands.
Engie's Wilhelmshaven plant in Germany is one of the most modern in Europe, with an efficiency level of 46 percent. Switzerland's BKW Energie AG has a 33 percent stake and municipal utility WSW Energie & Wasser AG owns 15 percent.
In addition to coal-fired capacity, Engie's Zolling plant has two 25 MW gas turbines that can be switched on in times of high demand or undersupply to balance out demand swings. Engie also operates a 20 MW biomass plant there.
Possible buyers for the assets could include Czech energy group EPH and German utility RWE, which have both snapped up conventional power plants in the past or have announced plans to do so, the people said.
Engie, EPH, JP Morgan and RWE all declined to comment.
Engie, Europe's fourth-largest utility by market value, has long been reducing exposure to coal, reinvesting proceeds from sales of fossil-fuel assets in renewables and grids as the sector shifts away from conventional power source.
Sources said this week the group was looking at big acquisitions that would generate cash, in a strategy switch following the sale of 15 billion euros ($18.6 billion) of assets that have shrunk its earnings base.
Reporting by Christoph Steitz, Jason Hovet and Geert de Clercq
Email