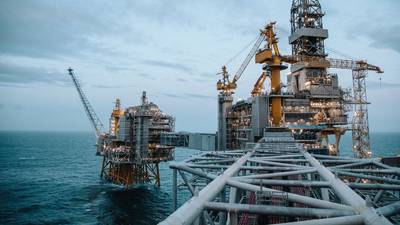 Norwegian oil producer Equinor aims to cut greenhouse gas emissions generated at offshore fields and onshore plants in Norway by about 40% in the coming decade and to near zero by 2050, it said on Monday.

The cuts could allow Norway, western Europe's top oil and gas exporter, to continue to pump millions of barrels of oil even as the country seeks to fulfill obligations under the 2015 Paris climate agreement to slash domestic emissions.

Equinor and its partners plan to invest around 50 billion Norwegian crowns ($5.7 billion) by 2030 to cut emissions to an annual rate of about 8 million tonnes from 13 million tonnes recorded in 2018, the company said.

"Further reduction ambitions towards 70% in 2040 and close to zero in 2050 will entail additional measures, further electrification projects, consolidation of infrastructure as well as opportunities to develop new technologies and value chains," the company added.

The initial cuts will primarily come through replacing electricity from gas turbines with renewable energy at major installations, including offshore wind turbines and hydroelectric power via subsea cables.

Oil and natural gas generate about half of Norway's export revenue and some 25% of the country's CO2 emissions.

Under the 2015 Paris climate agreement, almost 200 governments agreed to cut emissions to help avert more floods, droughts and rising sea levels, and promised to "enhance public and private sector participation" in the cuts.

Equinor has argued that slashing emissions from the production process should allow the company to continue to pump for decades to come, even though the final consumption of its oil and gas will continue to emit greenhouse gases.

The company has said it expects Norway's petroleum output, based on current resources, to fall by more than half by 2050, but environmental campaigners argue this will not be sufficient.

"Too little, too late. In 2050 there can't be any oil extraction from Norway's continental shelf," tweeted Andreas Radoey, a board member at NGO Nature and Youth.