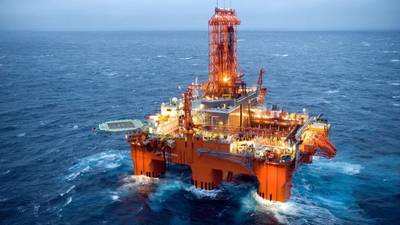 Norwegian oil company Equinor announced Wednesday it has proven gas and condensate in the 6406/2-9 S exploration well at Ragnfrid North around 20 kilometers south of the Kristin platform in the Norwegian Sea. Recoverable resources are estimated at 6-25 million barrels of oil equivalent.

“We are pleased to start the new year by announcing a new discovery. Exploring for resources close to existing infrastructure is a central part of Equinor’s strategy to further develop the Norwegian continental shelf (NCS). We need this kind of discoveries in the years to come,” said Nick Ashton, Equinor’s senior vice president for Norway and the U.K.

Exploration drilling in Ragnfrid North 6406/2-9 S started on October 3, and the well was drilled by the West Phoenix rig in production licence 199, about 22 kilometers south of the Kristin field in the Norwegian Sea and 195 kilometers northwest of Kristiansund. Equinor is operator and its partners are Petoro, ExxonMobil and Total.

According to the Norwegian Petroleum Directorate (NPD), the primary exploration target for the well was to prove petroleum in Middle to Lower Jurassic reservoir rocks (in the Garn and Ile formation and in the Tofte formation, respectively). The secondary exploration target was to prove petroleum in Upper Cretaceous reservoir rocks (the Lange formation) and in the Lower Jurassic (the Tilje formation), in the event of discovery in the overlying Tofte formation.

In the secondary exploration target in the Lange formation, the well encountered several one to five-metre thin gas-bearing sandstone layers, with poor reservoir quality. The uppermost layer has a three-meter gas column. The upper part of the Tilje formation is about 105 meters, whereof 75 meters of effective reservoir rocks with aquiferous sandstones, mainly with poor reservoir quality.

Preliminary estimates place the size of the discovery between one and four million standard cubic meters (Sm3) of recoverable oil equivalents.

“Ragnfrid North will, together with the former discoveries Lavrans and Erlend East, give a more detailed picture of the potential in this area of the Norwegian Sea,” Ashton said.

The licence partners will now evaluate the discovery for development and tie-in to the Kristin field and further maturing of the Kristin South project.

“The Ragnfrid North discovery will increase the probability of discovery for other prospects and pave the way for more drilling operations in this central part of the Norwegian Sea. This is something we will consider going forward while further analyzing the results. The NCS still offers great potential,” Ashton said.

The well was not formation-tested, but extensive data acquisition and sampling have been carried out, NPD said.

This is the 12th exploration well in production licence 199. The licence was awarded in the 14th licensing round in 1993.

Well 6406/2-9 S was drilled to respective vertical and measured depths of 4,880 and 4,944 meters below the sea surface, and it was terminated in the Tilje formation in the Lower Jurassic. Water depth at the site is 278 meters. The well will now be permanently plugged and abandoned.

West Phoenix is now being moved to the U.K. continental shelf to drill the Equinor-operated Bigfoot prospect south of the Mariner field. 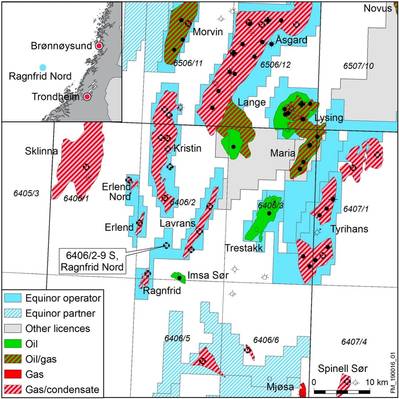