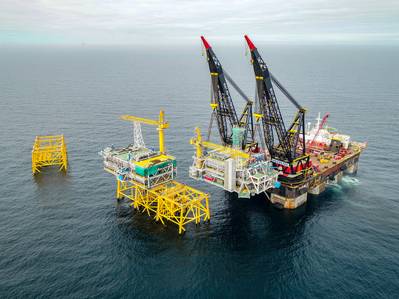 Norwegian oil and gas firm Equinor said on Thursday second-quarter adjusted operating income rose from a year ago but missed forecasts due to higher maintenance costs at its Norwegian fields.

The company formerly known as Statoil (STO) also said it was too early to follow peers, such as Shell and Total , with share buyback programmes as it had investment plans to fund.

"We did not feel it was natural in the second quarter (to launch buybacks) because we have big projects and increased working capital. We need to come back to the question at a later point," Chief Financial Officer Hans Jakob Hegge told Reuters.

Due to acquisitions and working capital increase, the company's net debt ratio rose to 27.2 percent in the second-quarter from 25.1 percent in the first quarter.

Equinor's executives previously said their near-term priority was to reduce gearing before launching any buybacks.

The company offered a quarterly dividend of $0.23 per share as forecast and has previously said it expected to maintain that in the third quarter.

Some analysts expect Equinor to pay more to its shareholders in the longer-term.

"Despite some headwinds into 2018, we expect to see the company generate significant cash flow growth over 2019-21, which suggests the potential for increased returns to shareholders over the next few years," Biraj Borkhataria at RBC Capital Markets said in a note.

Equinor's adjusted earnings before interest and taxes rose to $4.3 billion in the second quarter from $3 billion a year ago, missing a forecast for $4.6 billion in a Reuters poll.

Earnings from the biggest of the company's three divisions, the Norwegian exploration and production, were affected by "higher turnaround activity", Equinor said.

Chief Financial Officer Hans Jakob Hegge said higher operational costs were expected at some Norwegian fields and from suppliers in the United States, but he said Equinor still had "good control on costs".

"This underlines the importance of continued cost focus across the organisation," Chief Executive Eldar Saetre said in a statement.

The Norwegian company has maintained its guidance on capital spending and production growth, but it now sees a bigger impact on its full-year production due to higher maintenance.

Equinor expected maintenance work to pull down output by 35,000 barrels of oil equivalent per day (boepd) for 2018, instead of the 30,000 boepd it previously saw.

Equinor's equity production stood at 2 million boepd in the second quarter, up 1.6 percent from the same quarter a year ago.

The increase was underpinned by higher output in the United States, which was once a struggling operation for the company but has now turned around.