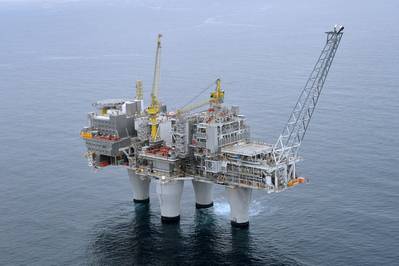 Oil producer Equinor aims to boost the recovery rate from its Norwegian fields to well above the global average to extend production from the mature basin beyond 2030.

Equinor announced plans on Tuesday to drill up to 3,000 wells offshore from its native Norway in coming decades - almost as many as it has drilled since its startup in 1972 - to mitigate declining output from older fields, and extend the production lifetime of more than 20 installations.

The company said it remained on track for to keep profitable oil and gas production in Norway towards 2030, but needed new measures to tackle a decline after that, including a deliberate push to find more natural gas.

"We aim to achieve an average recovery rate of 60 and 85 per cent respectively at our oil and gas fields. This is almost twice the average global oil recovery rate of 35 per cent," Arne Sygve Nylund, Equinor's head of development and production in Norway, said.

Nylund didn’t say when the company aimed to achieve the target rates, but the plan to drill up to 3,000 production and exploration wells covers a period up to 2040.

The plan meant that Equinor will I drill about 150 production wells per year to boost the output from the existing field, up from the previous plan of 80-100 wells indicated earlier this year, a spokesman for the company said.

In addition, Equinor plans to drill between 20 and 30 exploration wells each year off Norway, including both its own and partner-operated wells, to search for new reserves.

"I think we can keep that rate for at least another five years," Dodson told Reuters.

The Norwegian company, Europe's second-largest gas supplier after Russia's Gazprom, said it would prioritize natural gas in its exploration plans offshore Norway, aiming to add more volumes around the existing infrastructure, such as the Aasta Hansteen field in the Norwegian Sea, and elsewhere.

"Natural gas is a commodity important to climate... We see more demand for gas, and we can play a bigger role in producing and delivering gas to the global markets," Nylund told Reuters.

"We also need to use the existing infrastructure in a timely manner, it will not last forever," he added.

While the company believes its Norwegian resource potential is as large today as it was a decade ago, each prospect is smaller, making it necessary to drill more and cheaper wells, exploration chief Tim Dodson told a news conference.

The company is currently investing heavily to develop the $15 billion Johan Sverdrup oilfield, which will be completed in two stages between 2019 and 2022, as well as the Arctic Johan Castberg and an extension of the Troll gas field.

"We need to start now. After 2022 there are currently few big projects remaining. The choices that we, the authorities, and the industry make today will be decisive," Nylund said.

"We have developed a strategy for more gas exploration. We will also test new ideas in some prospects every year. The likelihood of discovery in these wells will be lower than in other targets, but we see it as necessary to regularly test a few of what we call 'game changing wells'," he added.

Earlier on Tuesday, Equinor announced plans to partly power two of its North Sea oilfields with floating wind turbines, which in turn would help the company cuts its carbon dioxide emissions.