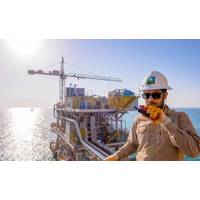 Saudi Aramco has received bids for its shares totalling $44.3 billion so far, lead manager Samba Capital said on Friday, putting its initial public offering on track to be over-subscribed.The state-owned oil giant plans to sell 1.5% of the company's shares for as much as 96 billion riyals ($25.6 billion), a deal which would give it a market value of $1.7 trillion.Overall demand so far totals 1.7 times the amount of shares on offer…

Libya's National Oil Corporation planned to raise production to 2.1 million barrels per day (bpd) by 2024, Chairman Mustafa Sanalla said in a statement on Wednesday.Sanalla added that NOC was on track to reach more than $20 billion in annual revenue.There were also plans to restore production at damaged oilfields and to raise gas production to 3.5 billion cubic feet by 2024.The plans will cost $60 billon, including $15 billion from public funds.(Reporting by Alaa Swilam and Aziz El Yaakoubi; editing by David Evans)

Abu Dhabi's state-owned ADNOC Offshore has completed the installation of all Nasr field facilities, said a company tweet on Sunday.''This megastructure is one of the largest supercomplexes in the world, with Nasr field contributing to ADNOC’s end of 2018 oil production capacity target of 3.5 million barrels per day,'' it said.(Reporting by Maher Chmaytelli, editing by Aziz El Yaakoubi) 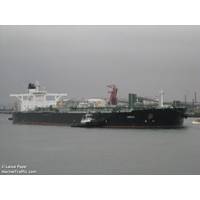 Saudi Arabia said on Thursday it was suspending oil shipments through a strategic Red Sea lane after Yemen's Iran-aligned rebels attacked two tankers in the waterway, underscoring the risk of an escalation in tensions in the region.Brent crude futures rose 59 cents to $74.52 a barrel by 1008 GMT, extending their rally into a third day but falling from a 10-day high in earlier trading.Saudi Arabia and arch-foe Iran have been locked in a three-year proxy war in Yemen…

Abu Dhabi National Oil Co (ADNOC) signed a 15-year gas sales agreement on Tuesday with the Dubai Supply Authority to supply the city's natural gas needs, a statement from the company said. The deal replaces a similar agreement signed in 1998, from which ADNOC built the Taweelah–Jebel Ali pipeline and the first gas deliveries from Abu Dhabi to Dubai followed in 2001. The agreement was signed at ADNOC's headquarters by the company's CEO and the managing director of the supply authority.     Reporting by Aziz El Yaakoubi

Aramco converted to Joint-Stock Firm Ahead of IPO

The change is a customary step in IPO preparations; Aramco IPO said to be on track for 2018. Saudi Arabia has changed the status of its national oil giant Aramco to a joint-stock company as of Jan. 1, in a key step for an initial public offering (IPO) planned for later this year. The sale of up to 5 percent of Saudi Aramco, expected to go ahead in the second half of 2018, is a centrepiece of Vision 2030, an ambitious reform plan to reduce the dependence of the Saudi economy on oil.

A Moroccan court has given the country's only oil refinery, Samir, another six months to restart production, two sources from the company said on Tuesday, giving it more time to attract a buyer during a court-ordered liquidation. Samir halted production in August due to financial difficulties, then a court ruling placed it in liquidation and named an independent trustee to run it. The same ruling had given three months to the new managers to restart production in the 200,000 barrel per day complex in an effort to secure a buyer.

Libya's National Oil Corporation has emptied oil storage tanks in Ras Lanuf as a precaution after the Islamic State group attacked Libya's two biggest oil ports last week, an official from the company said on Monday.   "We have taken all the oil stored in the tanks there (Ras Lanuf) to a safer location," Mohamed al-Manfi, an oil official in eastern Libya said. (Reporting By Ayman al-Warfalli, writing by Aziz El Yaakoubi; Editing by Susan Fenton)

Morocco has launched an international tender seeking a financial advisor for its plan to boost liquefied natural gas (LNG) imports, state-owned power utility ONEE said on Thursday. ONEE said the last date for submitting bids for the tender is Dec. 9. It will open for bids that day at 10 am (0900 GMT). The plan, worth up to $4.6 billion, includes the import of up to 7 billion cubic meters (bcm) of gas by 2025, along with the construction of a jetty…

Total Maroc, owned by France's Total, plans to raise between 612 million dirhams and 720 million dirhams ($74.48 million) in an initial public share offer, Moroccan bourse watchdog CDVM said in a statement on Saturday. Total Maroc commercialises around 1 million tonnes of energy products annually and has more than 270 service stations across the country with an estimated 11 percent market share, or a third of Morocco's oil distribution.

Libyan state firm Arabian Gulf Oil Company (AGOCO) is producing 317,000 barrels per day (bpd), the highest level in the last two years, the company's spokesman said on Monday. Libya now produces around 600,000 barrels of crude per day, less than half the 1.6 million bpd it produced before the fall of strongman Muammar Gaddafi in 2011. Several oil ports and major fields have been closed by fighting but the two biggest ports, Ras Lanuf and Es Sider with a combined capacity of 600,000 bpd, may open soon, officials say.

Gulfsands Petroleum has found gas at its DOB-1 well in Morocco in the Sebou onshore permit, the Office of Hydrocarbons and Mining said in a statement on Monday. The well was drilled at 1,127 meters depth and flowed at 175,500 cubic metres per day during four hours, the statement said. The well has been suspended pending future production. It is the second gas discovery for Gulfsands in Morocco. It said last January its Drc-1 well in the same area had found a gas bearing reservoir. Reporting by Aziz El Yaakoubi

Libyan forces on Tuesday battled Islamist militants with rockets and warplanes for control of an army base in the eastern city of Benghazi after at least 30 people were killed in overnight fighting. Intense fighting in Benghazi, Libya's second city, and battles between rival militias in the capital Tripoli have pushed Libya deeper into chaos after two weeks of the fiercest violence since the 2011 civil war ousted Muammar Gaddafi.

Libya Says Its Oilfields Are Safe from the Fighting

Libya is pumping crude oil at around 500,000 barrels per day and all its oilfields are secure despite continued violence, an official from the Libyan Oil Ministry said on Tuesday. Intense fighting in the eastern city of Benghazi, where many oil ports are based, and battles between rival militias in the capital Tripoli have pushed Libya deeper into chaos after two weeks of the fiercest violence since the 2011 civil war ousted Muammar Gaddafi. 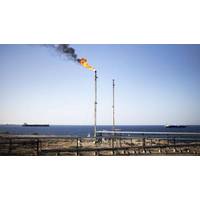 Clashes in Libya spread from Tripoli to the western town of Zawiya near Tunisia's border, where a large oil port is located, killing four people over the last two days, local town council officials said on Thursday. Foreign governments have mostly closed their embassies and evacuated staff after three weeks of clashes turned Libya's two main cities - Tripoli and Benghazi - into warzones in the worst fighting since the NATO-backed war against Muammar Gaddafi.

Libyan oil output is around 450,000 barrels per day, down from 500,000 bpd two weeks ago despite clashes between rival armed factions in Tripoli and Benghazi, a spokesman for Libya's National Oil Company said on Monday. The spokesman declined to give further details but said that all oilfields were secure. Reporting by Aziz El Yaakoubi

Morocco has launched a national plan to boost imports of liquefied natural gas (LNG), including the construction of a terminal at the industrial hub of Jorf Lasfar, worth up to $4.6 billion, its energy minister said on Tuesday. The idea to build a LNG terminal was announced a few years ago but the government has given no reasons for the delay. Jorf Lasfar is an industrial hub on the Atlantic coast near El Jadida city where, among others, the state-run phosphate company OCP and Abu Dhabi's TAQA have facilities.

Circle Oil drilling in the KSR-12 well in Morocco has found gas on two levels in the Sebou onshore permit, the Office of Hydrocarbons and Mining said in a statement on Friday. It is the second discovery for Circle Oil in Sebou after it has found gas on three levels while drilling the SAH-W1 well last June. The statement added that future production from the KSR-12 well will feed industries in the Sebou region. The well is located in the central zone of the permit near the city of Kenitra.

A consortium led by Saudi Arabia's ACWA Power International has won a 1.7 billion euro contract to build two solar power plants totalling 350 megawatt (MW) in the southern Moroccan city of Ouarzazate, the Moroccan solar energy agency said in a statement. The consortium includes Spain's Sener and had priced its offer at 1.36 dirham per kilowatt (KW) for the first 200 MW plant with parabolic mirror technology, while it priced the plant with solar power tower technology at 1.42 dirhams per KW.